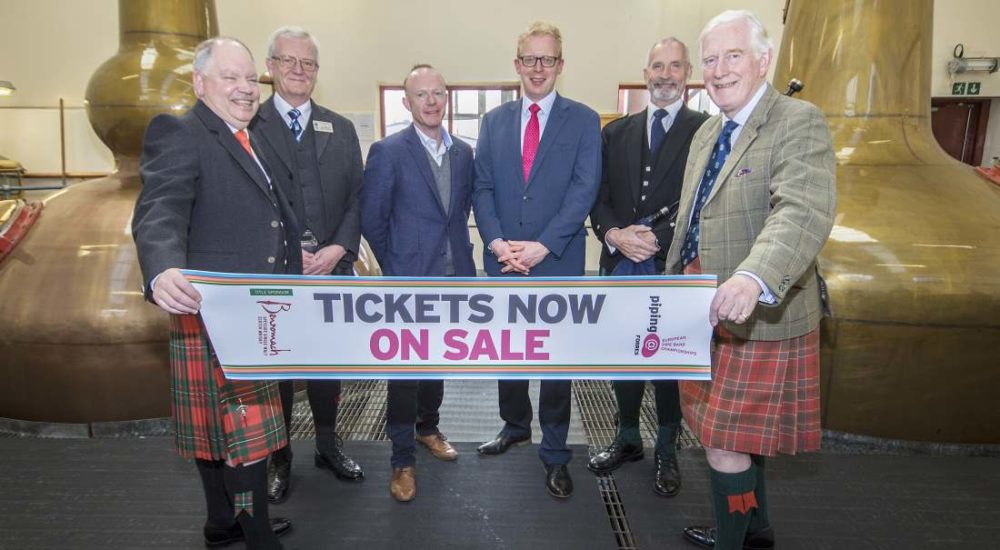 THE COUNTDOWN WAS STARTED on Thursday for a fifth year of the European Pipe Band Championships hosted by Moray.

Piping At Forres has seen thousands attracted to Grant Park in each of the previous four years – the event growing in status as it has been firmly embraced by local people and their international guests.

This year the event takes place on June 24, with sponsors Benromach joining with organisers and guests at an official launch at the Forres distillery.

Alan James, chairman of Forres Events Limited, the company behind Piping At Forres, commented: “The launch event was a huge success and marks the countdown to what is now a firm fixture on the piping calendar and also a key date in the diary for locals and tourists alike.

“They come and spend the whole day in Grant Park soaking up the atmosphere of the piping – while enjoying all of the other attractions such as the craft village, food and drink stalls, the funfair and the many interactive attractions that make it a great family day out.

“Since the first Piping At Forres in 2013, the event has grown and each year there is something new. This year we are delighted to be part of Scotland’s Year of History, Heritage and Archaeology – and the park will be cast back in time when reenactors from various historical periods descend on the arena.

“We have also commissioned a historical walking app which will not only get people moving around Grant Park and learning about its history, but also get people out into the town itself, creating a real carnival feel not just in the park, but throughout the whole of Forres.”

Chieftain this year will be Major General Seymour Monro, who expressed his personal delight to have been invited to take up the role this year: “It is a spectacular event which has put not only Forres but Moray on the map.

“From across the world, pipers and drummers travel to Forres to take part. The people of Forres and the organisers of Piping at Forres are now renowned for putting on a fantastic show – as a local man it is a real honour to be able to support this superb event and the launch party has kicked that off very nicely.”

Last year, Piping at Forres drummed up over £1 million for the local economy and was shortlisted for the Best Cultural Event or Festival award in the 2016 Highlands and Islands Tourism Awards.

Laurie Piper, Tourism Operations Manager for Moray Speyside Tourism attended the launch party and spoke about the economic and cultural benefit of events such as Piping At Forres.

He said: “Piping At Forres has established itself as one of Moray’s key annual events, attracting patrons from across Scotland and beyond and offering a unique opportunity for visitors to enjoy a truly authentic taste of this most special part of Scotland.”

On behalf of Benromach, who have sponsored the event from the outset, Ian Chapman said: “Piping At Forres promotes the local community and this is something Benromach is keen to support. We are looking forward to this great day out in June.”

Paul Bush OBE, VisitScotland’s Director of Events, added that Scotland provided the perfect stage for events – and Forres had grown to be a “standout” event for the region.

He added: “Set against the scenic backdrop of Forres, the sight and sound of pipers together with the array of entertainment, ensures that locals and visitors travelling from far and wider to the Championships have a wonderful day out whilst also celebrating Scotland’s Year of History, Heritage and Archaeology.”

For more details on the championships and advance ticket bookings visit http://pipingatforres.com/.