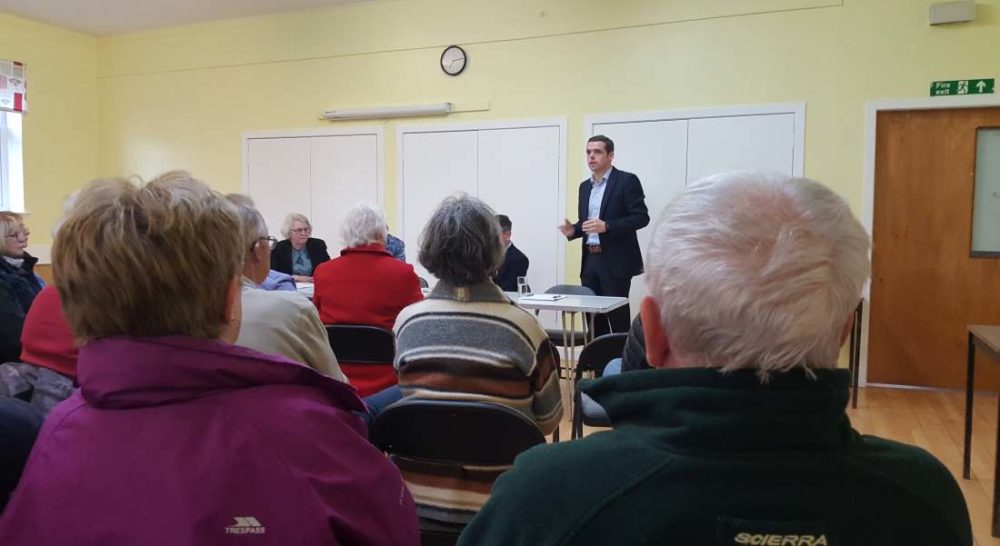 DOUGLAS ROSS MSP is hoping to talk through plans by the Co-operative to create a new store in Lhanbryde – on the site of a Hotel that many local people do not wish to lose.

The regional MSP and local councillor attended the meeting on Wednesday in the town where several residents expressed their anger and disappointment at the U-turn by a developer, who had previously pledged to ‘find another way’ of developing the site that did not involve demolition.

Mr Ross previously spoke against the development plans to demolish the building and turn it into a convenience store when the application came before the planning committee – at the time the only planning committee member to oppose the proposal.

Now in his role as a MSP covering the Moray area he has written to the Co-op seeking a meeting with the Chief Executive to discuss local concerns. He said: “I was greatly encouraged by the large turnout from the local community which demonstrated that maintaining the Tennant Arms building is still a priority for many people in Lhanbryde.

“Having written to the co-operative group I’m hopeful of meeting with them soon to discuss all the issues connected with this proposal and to express the concerns local people have about their plans.

“The Tennant Arms is an iconic building in the village and there is a real determination from local people to save it and bring in back to use in a way that benefits the village rather than have it demolished and turned into a shop that is not needed at this location.

“I’ve already been in touch with the council since the meeting as a number of concerns were raised about the state of the building and the mess around it. Officers will be looking into this and a number of other issues highlighted by people living and working close to the Tennant Arms.

“Lhanbryde Community Challenge have done an excellent job in co-ordinating these meetings and I will continue to work with them and local residents to get the best solution for the Tennant Arms and Lhanbryde.”