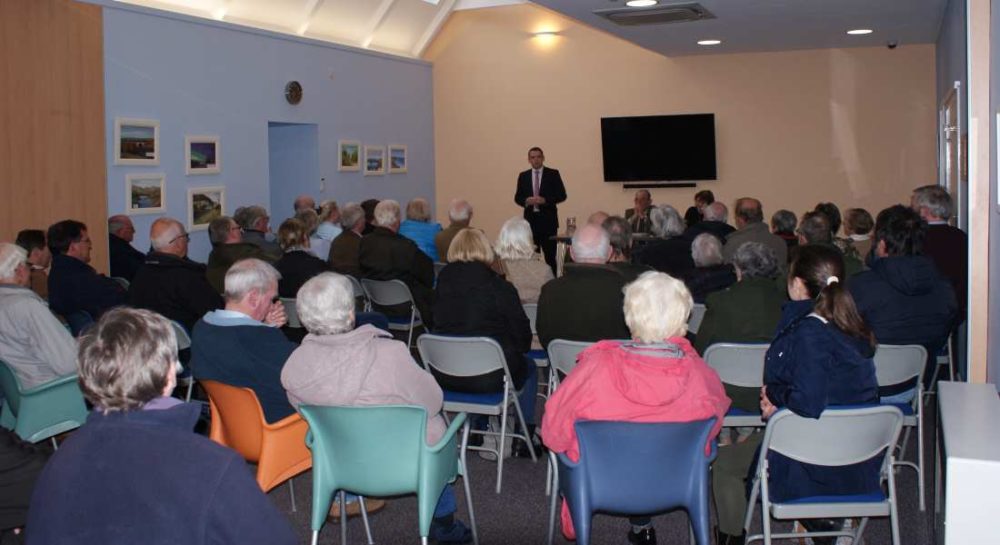 FORMAL APPROVAL OF Douglas Ross as the Scottish Conservative candidate for Moray in June’s General Election was given at a meeting in Elgin last night.

Mr Ross received the unanimous backing of his local constituency party – and made it clear that, if elected, he will stand down from his seat as a regional MSP.

With his role as a local councillor formally coming to an end of May 4, the MSP will turn his attention to making inroads on the majority of just over 9000 gained by the SNP’s Angus Robertson at the polls two years ago.

Speaking last night he said: “I’m extremely honoured to have been selected and am looking forward enormously to the election campaign.”

“By the time the election takes place in June, I will have stood down from the Moray Council and if elected to Westminster I will resign my seat from the Scottish Parliament to allow me to concentrate all my efforts on working on behalf of the people of Moray.

“I have had the great privilege of representing local people for the last ten years as a councillor and over the past year in the Scottish Parliament. I want to continue that representation at Westminster.”

Placing emphasis on his Moray roots, the MSP added that people in Moray have opportunity to vote for someone born and brought up in the region and who has a “real understanding of issues that matter”.

He continued: “A second independence referendum may be the First Minister’s priority, but it isn’t mine. I believe Moray needs a politician who will focus on the needs of the area, has a track record of putting their constituents before party politics and someone who will be a voice for the area within government.

“I have put my name forward for this election because I believe I am the best candidate to stand up against the SNP and their plan to break up Britain.

“I also believe we have to get the best deal for Moray, Scotland and the UK from Brexit, not ignore the decision people took last June. The SNP say they don’t want to be ruled by Westminster, but do want to be ruled by Europe. Many people in Moray disagree with that.

“The SNP have started their campaign negatively showing their fear about holding this seat. Unlike the SNP I will not stoop to making personal attacks during the campaign. I will be concentrating on the real issues that matter to voters.”