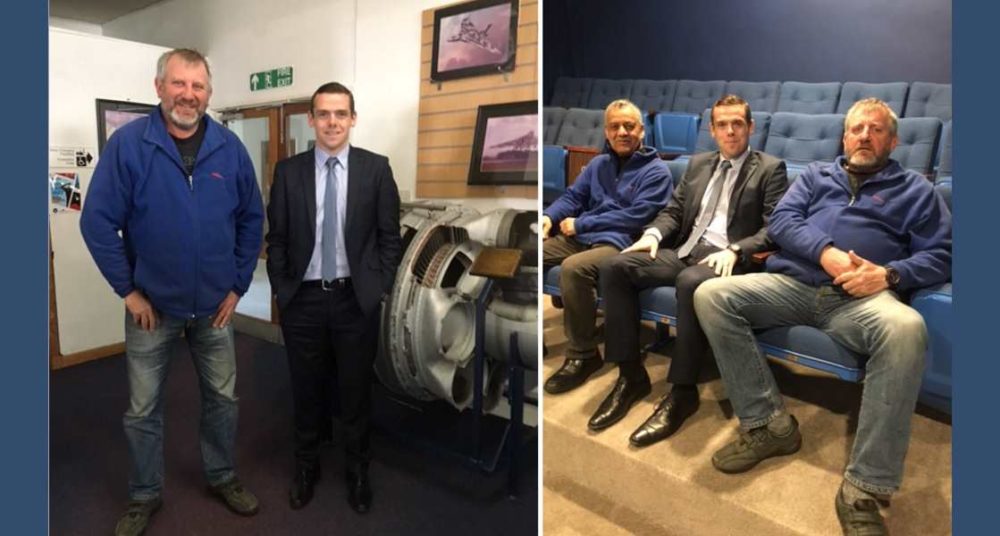 MORAY’S MILITARY CONNECTIONS were being highlighted in the local election campaign this week with Conservative candidate Douglas Ross paying a visit to Morayvia.

The Science, Technology and Aviation centre is the home for a collection of military aircraft and exhibits celebrating the importance of all three services to the region.

Politicians from all parties have stressed the importance of the Royal Air Force and Army to the sustainability of the region through the jobs they create and the spending power of service men, women and their families – many of whom choose to remain long after their service has ended.

A record number of exhibits are on show at Morayvia – with the latest delivered this week, a Jaguar aircraft that was once so familiar over the base at RAF Lossiemouth.

Conservative candidate for the Moray seat, Douglas Ross, visited the Morayvia Centre at Kinloss on Friday for an update on progress from the group who have been opened at a former primary school for just over a year.

He said: “Morayvia is an outstanding visitor attraction and demonstrates the proud military tradition we have in Moray.

“The fact is that the Conservatives are the only party at this election who will back our military wholeheartedly and secure the thousands of jobs here in Moray and across Scotland that rely on defence spending. We will always put Britain’s national security front and centre.”

Warning that a vote for the SNP could put defence assets at risk he added: “It’s now clear that, if ever given the chance, the SNP would ‘start from scratch’ and put defence jobs in danger. We must not allow that to happen and the best way to ensure it doesn’t happen is by saying No to a second referendum on June 8th and voting Scottish Conservative.”

Looking at the progress made since his last visit to Morayvia, the MSP said: “I was delighted to be given a tour around the centre by Morayvia members Stan Barber and Jim Simpson.

“It was fascinating to see the new area dedicated to their collection of aircraft engines and other hands-on exhibits; as well as being able to visit their new auditorium, which has been kitted out with a projector and screen and other equipment using funding from the Money for Moray scheme.”

Mr Ross is calling on the SNP to explain their own plans – after senior SNP MPs suggested earlier this year that, if Scotland became independent, they would “start from scratch” with a new “bespoke” independent Scottish defence policy.

Mr Ross said: “Such a plan could threaten the 30,000 jobs in Scotland, many of them in Moray, that rely on the military, either directly or indirectly.

“The Conservatives however will go into the June 8th election with a clear pledge to meet a commitment to spend 2% of GDP on defence. That is the choice people in Moray have at this election.”