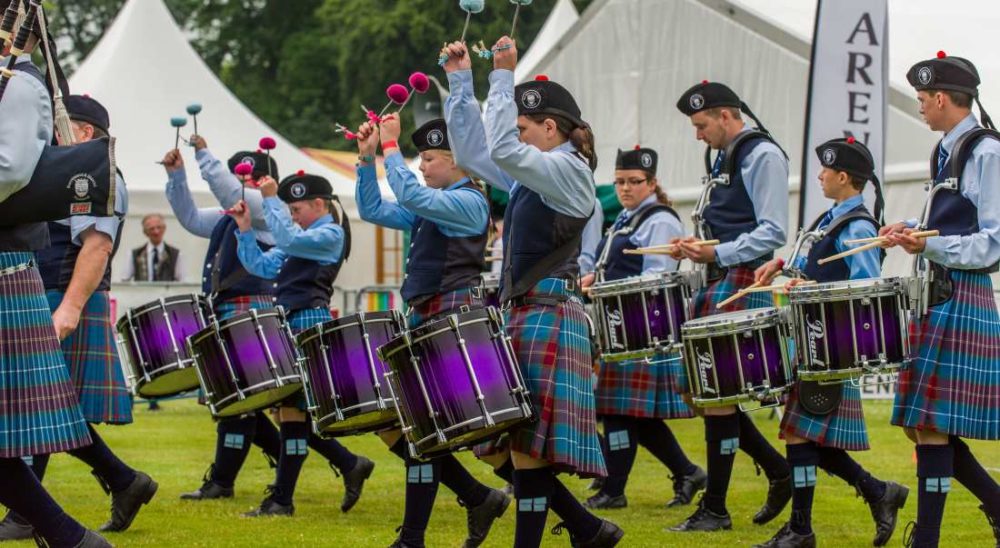 BUSINESSES IN AND AROUND FORRES are being inspired to beat the drum for the town by getting involved in what is now the region’s biggest one-day event.

Piping At Forres and the Forres Business Association have launched a competition where businesses are being encouraged to immerse themselves in the event – and they could win a £150 prize.

Marc Hindley from the Forres Business Association explained: “Big events such as Piping At Forres, Colours of Cluny, and the Findhorn Bay Festival for example can mean big business for the town, but it’s important that local businesses feel part of these events too, hence why we are working with the organisers at Piping At Forres on this competition.

“The competition is open to all businesses in the IV36 postcode area, and it’s really important that we stress that. The business association is not just about the High Street.

“It may be that shop owners want to dress their windows with a piping theme or tie it in with the Year of History, Heritage and Archaeology which Piping At Forres is part of, or it may be they want to create some kind of item to sell, or food outlets such as the restaurants, cafes, bakers and butchers create a culinary delight with a piping or drumming feel.

“The options are endless, we want people to be creative and we want our businesses have fun and tap into the event. The event brings thousands of people to the Forres area, and making visitors feel welcome has great long-term value for the town and its businesses, and not just those in the tourism sector.”

Ideas need to be in place by Monday June 12 and judging will take place on Friday, June 16 a week before the European Pipe Band Championships which is supported by title sponsor Benromach Speyside Single Malt Scotch Whisky. Laurie said: “This is a great idea by the Forres Business Association. Events like Piping At Forres are crucial for the area and entice people not just from across the region but from around the world too.

“What better way to get people interested in your product or shop than by creating something unique that’s going to make people want to stay longer and potentially visit your business.”

Last year, Piping At Forres generated over £1m for the local area according to an independent economic report and the feedback study gave the event nine out of 10 for overall customer enjoyment and attracted more pipers than ever before.

Jo Robinson, VisitScotland Regional Director, said: “I would encourage all the businesses in this area to get involved in this competition, which is a bit of fun but also shows that they are getting behind this hugely successful annual event, which brings so many visitors into the town.

“Tourism is leading economic transformation in Moray Speyside through redevelopment and expansion of existing products, innovation and bringing new opportunities to the visitor economy.”

Now in its fifth year, Piping At Forres not only includes world class piping and drumming, Highland dancing and the World Tattie Scone Championships but also includes a food and drink village, a craft and retail village, bars and family attractions such as funfairs.

Local businesses should Email FBA Marketing Officer claire@chitchat.scot by June 12 with their completed ideas to ensure that all the information is handed to the judges for June 16.