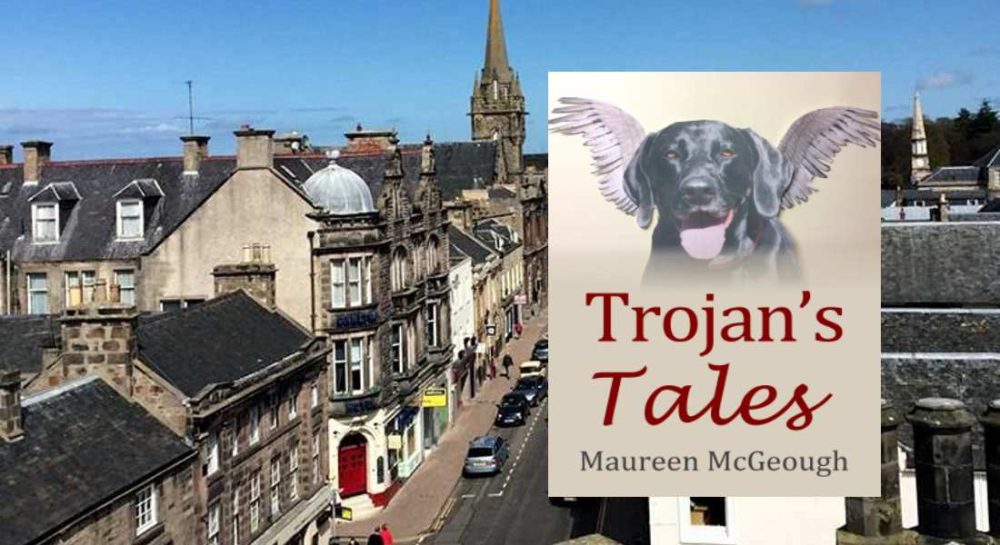 ADOPTING A DOG in Moray has become the inspiration for a stunning new young adults’ novel penned by a former Forres Orthopaedic secretary.

Maureen McGeough’s beautifully told ‘Trojan’s Tales’ is set in the Moray town where she lived for five years.

The black Labrador taken on by Maureen, 59, became a trusty companion – and is now the protagonist for her first book.

Maureen said: “Trojan’s Tales is based in Forres, a beautiful sleepy small town in the Scottish Highlands. I lived there for five years and it was there that we adopted our forever friend, Trojan.

“I have always thought that dogs are very spiritual and I always thought of Trojan as my guardian angel. Trojan, who was my inspiration for this book, and the other main character, Kristopher, was based on my youngest son Chris.”

Trojan’s Tales tells the story of a child who has just lost his father in an accident. What was intended as a distraction from his grief turns out to be a life-changing guardian angel, in the shape of rescue dog Trojan.

Described as the “perfect read for older children” Trojan’s Tales is an uplifting and heart-warming read and the result of a long-held ambition for Maureen, from Coatbridge, who had always wanted to become a writer after leaving school.

She actually wrote Trojan’s Tales almost 15 years ago – it was only after being talked into publishing her work that the grandmother of seven began writing a sequel to her debut novel.

Maureen added: “Trojan’s Tales is about a beautiful black Labrador who is drawn to nine-year-old Kristopher, who is deeply depressed at the loss of his father.

“The little boy slowly discovers his pet dog is more than just your average dog when Trojan speaks to him and takes him on a series of adventures.

“It is only when Trojan thinks Kristopher is coping with life and spending time with his friends again, Trojan tells him he must leave to help another child. Lots of family and friends read Trojan’s Tales and really enjoyed it.”

Trojan’s Tales is available through Amazon in paperback or electronic format.