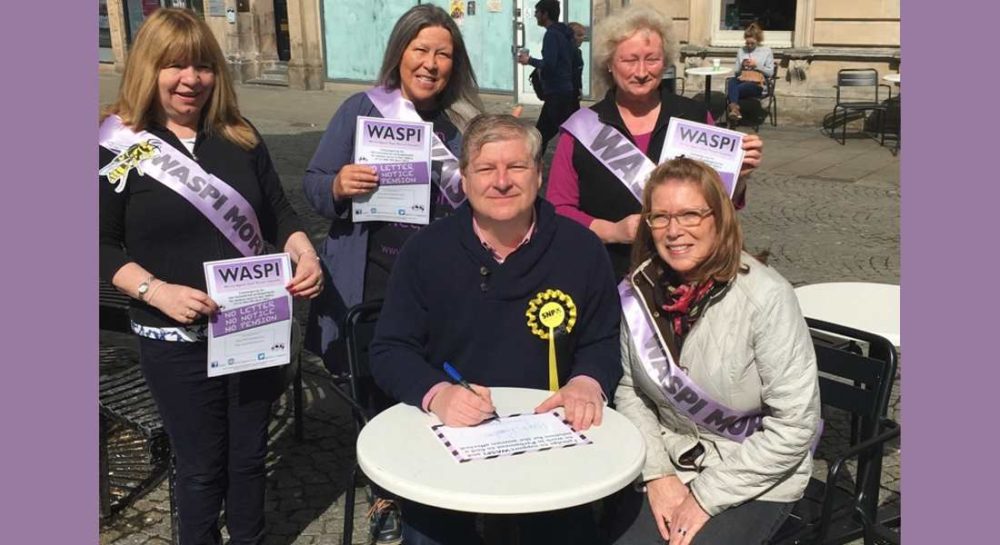 ANGUS ROBERTSON HAS vowed that he will continue to fight for the pension rights of women ‘every step of the way’ should he be returned to the Westminster parliament.

Mr Robertson met with WASPI campaigners in Elgin at the weekend when he signed a pledge of support for their cause of a fair deal.

The SNP candidate on June 8 said that the manner in which the equalisation of retirement age was carried out was a “national scandal” that left a large number of women struggling to make ends meet.

Mr Robertson has also pledged to fiercely oppose any attempts by the Tories to abandon the pension Triple Lock, which provides a guarantee to increase the state pension every year by the higher of inflation, average earnings or a minimum of 2.5%.

He said: “Now, more than ever, Scotland needs a strong SNP voice at Westminster to stop the Tories from having a free hand.

“The issue of pensions has come into sharp focus with changes to pensions that have been completely unfair to hundreds of thousands of women born in the 1950s and with the recent refusal by the Tories to commit to the Triple Lock on Pensions.

“I have challenged the Prime Minister directly on these issues and SNP MP’s would continue to fight for pension fairness.

“Pensioner poverty is on the rise across the UK – and the last thing we need are more Tory attacks on pensions. Only the SNP are providing the serious opposition on these serious issues.

“The SNP will oppose any Tory attempts to scrap the Triple Lock on pensions every step of the way – and we will continue to fully support the WASPI campaign in their efforts to secure fairness for the millions of women affected.

“With the support of people in Moray I will continue to provide a strong voice for older people here and across the UK and challenge the Tories on their unfair pension policies that have already seen many, many women lose out to the tune of thousands of pounds.”

Ross ‘every sympathy’ for WASPI position

His Conservative opponent in Moray, Douglas Ross, said that he has also met with representatives from the Moray WASPI campaign group and had every sympathy for their cause – insisting that the best way they could be represented was by a Moray MP “at the heart of government” rather than on the opposition benches.

Mr Ross said: “I have previously met with the WASPI group in Moray and was pleased to talk with them again at the weekend. I’ve also attended the Cross Party Group on this issue in the Scottish Parliament and have said I will attend a similar group in Westminster if elected.

“I have family members who have been affected and I know many local people have also been impacted by these changes.

“I believe the best way to fight for a better deal is to have an MP for Moray at the heart of government speaking up on our behalf rather than an opposition politician speaking from the sidelines.”

(insideMoray has approached the Labour candidate, Jo Kirby, for her position on the WASPI campaign but has so far received no response.)