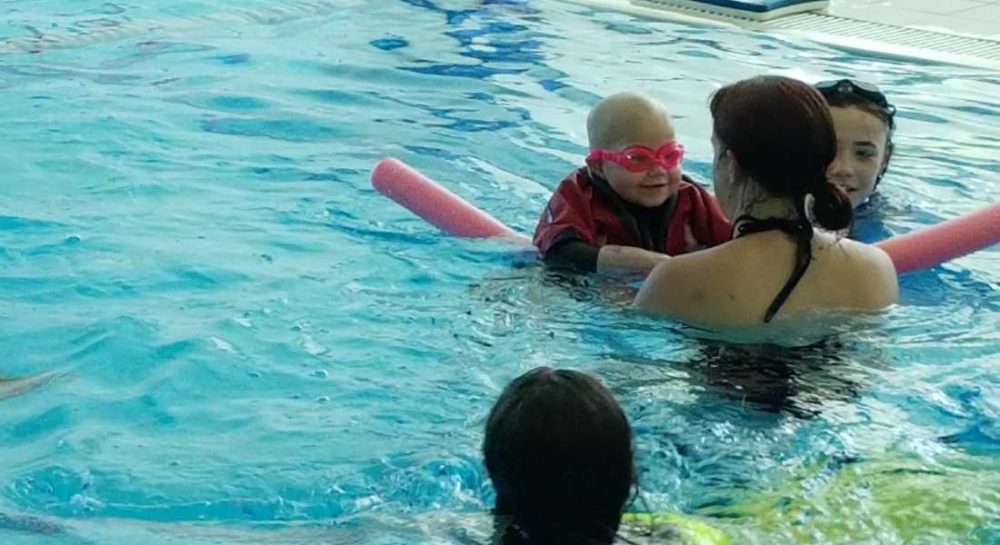 IT WAS A FANTASTIC day – that was the verdict from the family of Eileidh Paterson on Friday after the Forres youngster took to a swimming pool for the first time in years.

Five-year-old Eileidh achieved one of her ‘bucket list’ goals when she joined a couple of ‘mermaids’ and was carefully lowered into a swimming pool for the first time in three years.

The youngster suffers from neuroblastoma – a battle she has fought with incredible bravery, alas her family has been told that it will not be cured. A crowdfunding was launched to raise the £10,000 required to ensure that the plucky Eileidh would enjoy as many items on her bucket list as possible – and that is what took her to the swimming pool.

She had to wear a special dry suit for the swim but did not let that spoil the moment in the slightest, with her Mum, Gail, saying that the first item on the list was a tremendous success.

Gail said: “Her dry suit arrived about a week or so ago so she was able to go into a swimming pool for the first time in over three years.

“We were all amazed how quickly she took to it – I thought she may have been wary of going into the pool after such a long time, but in true Eileidh fashion, she nailed it!

“Eileidh very quickly figured out when to kick her legs and even wanted to go under the water like Cerys and the mermaids were doing. It was magical watching her having so much fun – it did, however, take a bit of persuasion to get her out of the pool.”

A promise of some face-painting convinced Eileidh to leave the pool – but when that was done she was less than impressed to find that she could not return to the water afterwards.

Gail said last night: “She has spent most of the night asking when she can go back again! Thank you so much to Zara and the ‘Love Rara’ mermaids for arranging such a magical experience for her.”

The crowdfunding for Eileidh’s bucket list is ongoing at https://www.gofundme.com/eileidhsjourney.