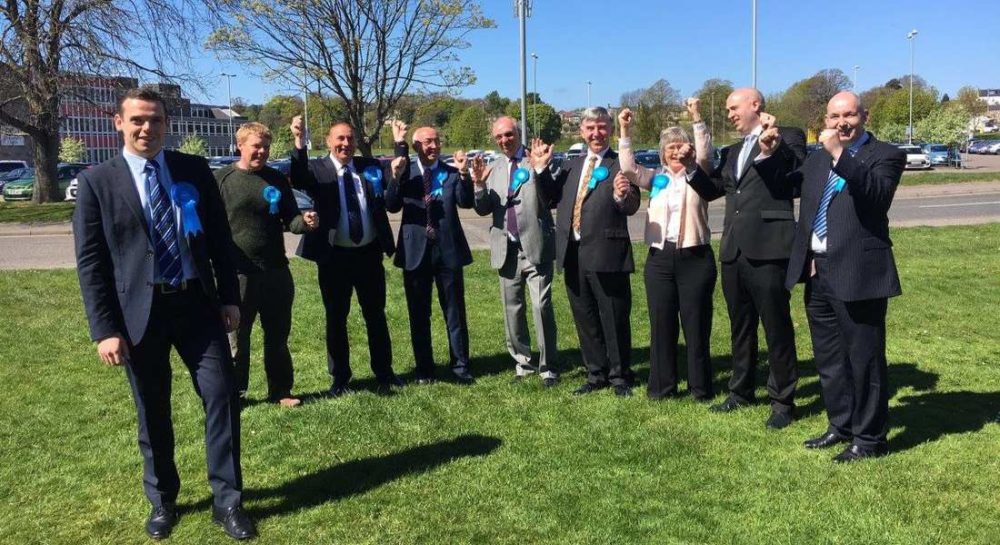 THE POLITICAL LANDSCAPE in Moray took on a very different look after the local elections on Thursday – now the two main political parties are gathering themselves for the task ahead.

With the largest group of nine belonging to the SNP, they have now said that they will be seeking a ‘progressive alliance’ with others to form an administration.

The new eight-councillor Conservative group, however, will have their own ideas for the future and it could well be that they will be seeking another – and more equal – alliance with some of the eight-strong group of Independents.

At least one new councillor will not, however, be joining any alliance, new Heldon & Laich councillor Ryan Edwards having stood on a “true independent” platform and insisting immediately after the count on Friday that he would be sticking to that pledge.

Councillor Edwards said: “I sought election partly because I did not believe that party politics should have a place in the Council – and I will be standing by that.

“I will not be joining any group but will argue the case for those in Heldon & Laich who placed their trust in me to act in their best interests.”

Perhaps the most likely outcome will be a second alliance between the Conservatives and remaining Independent members – several of who served in the last council leadership.

Talks will be taking place almost immediately, but for the time being Moray-based MSP Douglas Ross was the one with the largest smile as he lined up with the eight new Councillors representing his party.

He said: “This is a fantastic achievement for all our councillors and I know each and everyone one of them will be a strong voice for their local area.

“First and foremost Scottish Conservative councillors will be representatives of their communities and work every day to get the best outcome for local people. I’m grateful to everyone who voted Conservative today, many for the first time.”

The share of the vote may not have been a complete surprise, with many pointing to the SNP’s ‘Independence2’ announcement as a major factor despite that having no direct correlation to local politics.

For Ross, it was perhaps the share of the vote that will bring most encouragement, with Moray returning 36.1% in favour of the Conservatives, leaving the SNP over four points behind at 31.6%.

Mr Ross said: “Our share of the vote was higher than the SNPs which shows we have a genuine chance to win Moray in the General Election in a few weeks. However, we are starting as underdogs and have a big majority to overturn so we need all the support we can get.

“The council elections show that we can defeat the SNP in Moray and send the strongest message possible that people in this area don’t want a divisive second referendum. I will be working hard until the 8th June to convince as many people as possible that it’s time for change in Moray.

“We can elect a local MP to be at the heart of government not speaking for the side lines and by voting for the Scottish Conservatives next month we can have an MP who will always put Moray first.”

There will be much to ponder for Angus Robertson and his supporters when they launch their general election campaign in Elgin today (1pm at the Plainstones).