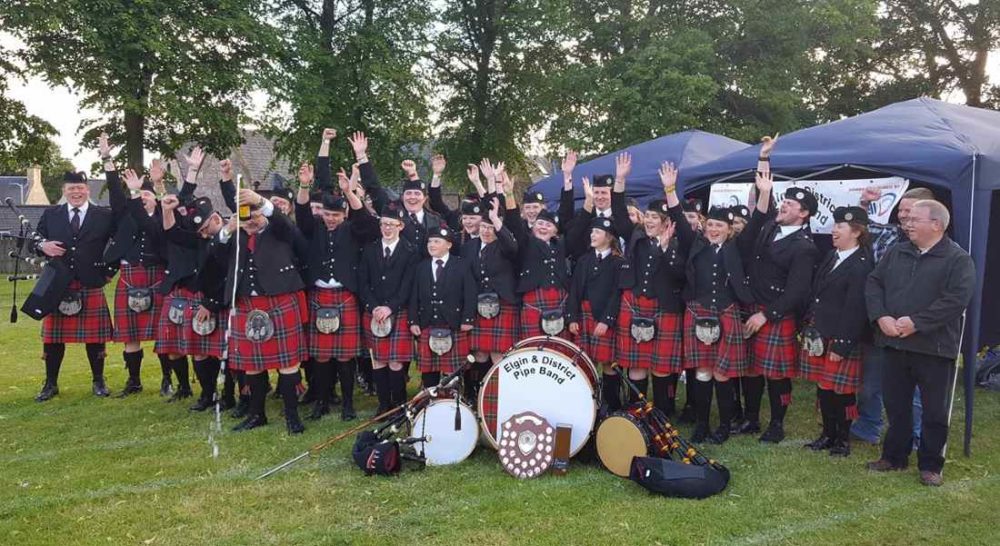 MORAY CLAIMED A MAJOR honour at the European Pipe Band Championships on Saturday with the Elgin & District band claiming the title in their category.

While Inveraray & District were crowned the overall European Champions at Piping At Forres for a second time, the celebrations were all local with the Elgin band taking first prize in the Grade 4B contest.

Over 100 bands were in competition on another thrilling day in what organisers admit has become the hope of the championships since it was first brought to Moray four years ago. For Inveraray it was a second win – they secured their first at the championships in 2014.

But local accolades went to Elgin, who were led by Pipe Major Peter Craigmile who told insideMoray: “It’s a fantastic result for the Band and all the hard work and effort that everyone has put in made this possible.

“The Major contest at Forres is like our home Grand Prix and to Win in front of our community and getting the biggest applause was priceless. The Band now look forward to the next two contests with even more confidence and hopefully more success.”

For much of the day Forres was blessed with fine weather – rewarded the thousands who again packed the arena at Grant Park. The Benromach-sponsored championships have certainly found a home with George Ussher, president of the Royal Scottish Pipe Band Association commenting: “It’s been an absolutely fabulous day, people are really enjoying themselves.

“The amount of families that we have seen is fantastic and this introduces new people to piping which is essence is what the day is all about.”

insideMoray will have more thoughts on Piping At Forres 2017 tomorrow.