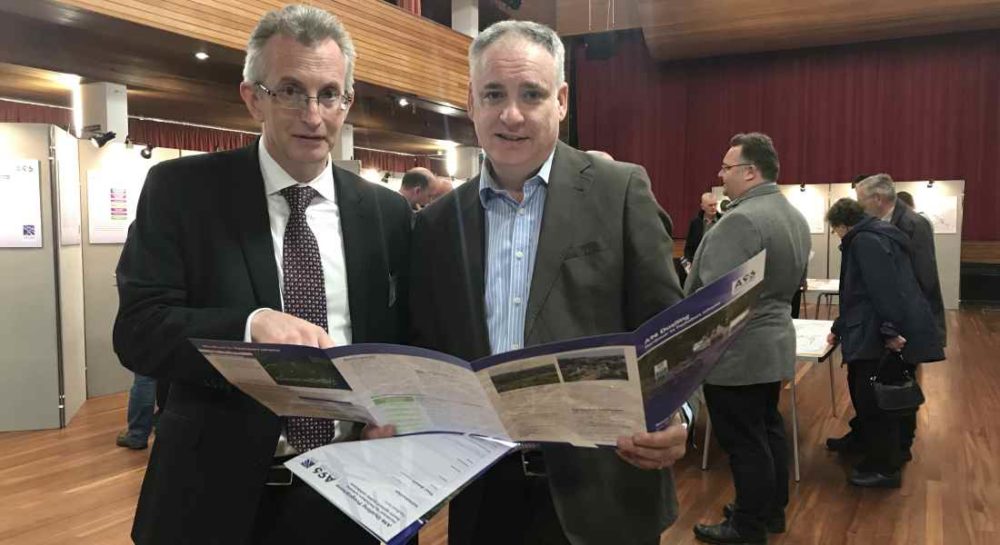 MORAY MSP RICHARD LOCHHEAD visited the opening day of public consultations on the route to be taken through Moray in the A96 dualling project – and welcomed a decision he had campaigned for.

Ahead of the opening session in Elgin on Monday, Mr Lochhead received a letter from cabinet secretary Keith Brown confirming that one route had been removed from the draft plans – the controversial ‘Option N’ which would have cut through the Pluscarden Valley.

Acknowledging the role of Mr Lochhead and local campaigners in the decision, Mr Brown said: “The initial design and assessment work undertaken to date, which was further informed by the concerns expressed by yourself on behalf of the local community, has made clear that options in the Pluscarden area would not perform well in terms of traffic flow/management.

“Given this, I can now confirm that these have been ruled out at this early stage in the process. I know you will be pleased with this outcome.”

Speaking at the consultation event on Monday, Mr Lochhead said: “The commitment of the SNP Government to dual the A96 is hugely significant and the results will be of great benefit to the people of Moray and the local economy.

“The cost of dualling the Hardmuir to Fochabers section is over £500m, which is a phenomenal investment in our local infrastructure and is something as Moray’s MSP I absolutely welcome.

“The scale of the project is massive and it was clear to see from the turnout at the exhibition today that the people in Moray have a keen interest in the dualling and want to have their say over the final route. It is really important that local views are taken into account and I would encourage anyone living along the A96 corridor to attend one of the consultation events this week to see the options and to share their views on the proposals before the deadline of 4th August.

“I’m pleased that as we move forward the option for the road to go through Pluscarden Valley has been removed following concerns expressed by the community. Having met with many concerns constituents, and having pushed for the option to be ruled out, I know this will come as a great relief and will give comfort to many people in Moray.

“Whilst there will be differing opinion of the best route, I hope that Transport Scotland will continue to engage with the affected communities and residents and do all they can to work with local people throughout the various stages of this massive project.”