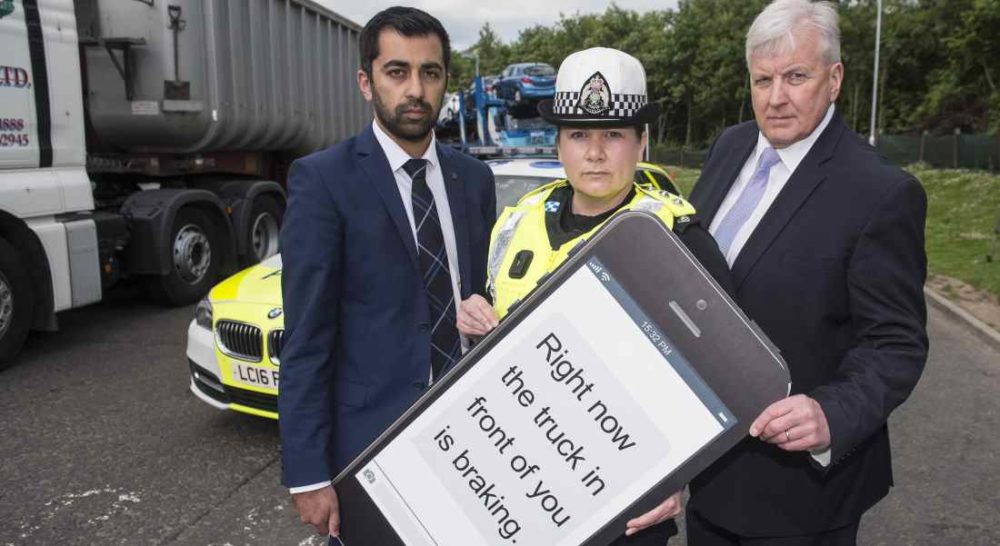 A NATIONAL CAMPAIGN is being launched today (Monday) to raise awareness of the dangers of looking at or using mobile phones while driving.

While the campaign is being launched by Transport Minister Humza Yousaf alongside the A9 Safety Group with the strapline ‘Looks Can Kill’, it applies to every motorist on every road in the country.

Pointing out that drivers are four times more likely to crash their vehicle if using a mobile phone while behind the wheel, the A9 Safety Group is also aware that a number of collisions over the past two years may have been caused by a high degree of fatigue or distraction.

That along with new research revealing that social media and ‘in car’ technology are causing a major distraction to Scottish drivers, continues to highlight the significant safety concerns around this issue.

Humza Yousaf said: “The consequences of using mobile phones for either making calls or for social media are all too apparent. The work being carried out by the A9 Safety Group clearly indicates that drivers are putting both themselves and others at significant risk with this activity.

“The Scottish Government is committed, through Scotland’s Road Safety Framework, to achieving safer road travel in Scotland. I have said many times before that one death on Scotland’s roads is one too many and we will continue to try to make the roads as safe as they possibly can be for all road users.

“Any activity which takes a driver’s concentration away from the driving task is potentially dangerous and we encourage everyone to acknowledge driving as a skill which requires concentration and judgement. I urge all drivers to avoid using mobile phones when behind the wheel.”

Chief Inspector Louise Blakelock from Police Scotland said: “Mobile phone use continues to be a concern for Police Scotland and the wider use of phones for social media use is now being identified as a contributory factor in a number of collisions.

“In the last two years a high proportion of fatal and serious accidents on the A9 Trunk Road are likely to have been caused by driver fatigue or distraction.

“In addition to this initiative Police Scotland will be undertaking a national enforcement campaign in July to further raise awareness. The level of concern with this activity was recently reflected in the doubling of the penalties involved for hand held mobile phone use.”