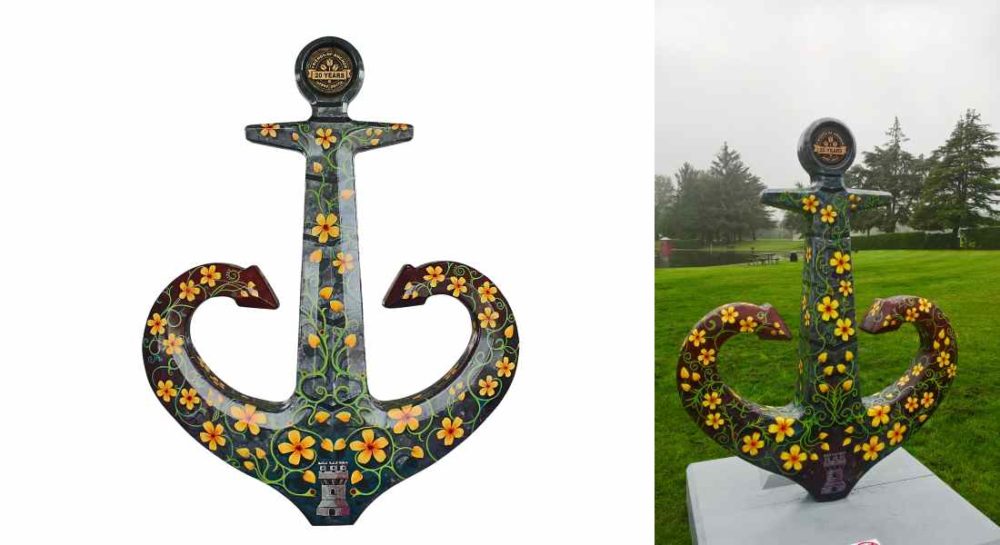 A GRANITE SCULPTED ANCHOR designed by renowned Scottish artist Lesley McKenzie will be given central stage in Elgin’s Cooper Park this summer.

The work is part of an anniversary celebration throughout the north east and Highlands for the charity Friends of ANCHOR.

Lesley’s Granite n’ Gold design has been created to give the appearance of granite blockwork with delicately entwining flowers growing up and around the structure. The granite symbolises core strength, and while the flowers appear fragile, they emphasize that life can thrive on the smallest of foundations.

Sponsored by the Robertson Group, the work is one of 20 individually designed anchors being delivered across the Grampian region, Orkney and Shetland and marks the 20th anniversary of Aberdeen-based charity Friends of ANCHOR.

Each will be on public display from the today (July 1) until the end of October to form the 20for20 anchor voyage. The voyage is the charity’s anniversary project which will contribute to their ‘Dream Big’ appeal and provides a platform for the public as well as artists, sponsors and partners to raise awareness of the charity and get involved in a creative and exciting way.

Bill Robertson, executive chairman and founder of the Robertson Group said: “Friends of ANCHOR is a charity that has helped many families across the North East of Scotland. Everyone has been affected by cancer at one point in their lives – whether it is first hand or someone close to them. Cancer has no prejudice.

“This sculpture represents the great strength people show when faced with adversity. And we at Robertson Group are proud to be able to sponsor something of such significance for people in Elgin to enjoy.”

Campaign officer is Kirsten Horne, who added: “The effort and craftsmanship that has gone into each and every one of the anchors is truly inspiring, especially given the motivation and inspirational reasons behind the anchor designs.

“They are a poignant portrayal of the effects that cancer has on so many of us. I would encourage the public to take the anchor voyage and see as many of the sculptures as possible. If you are unable to see them in person, we will bring the voyage to you. Campaign partners, Goshawk and Pinnacle, will use the latest technology in aerial unmanned aircraft and visual sensors to reconstruct the voyage on our website, to take you to the actual locations and savour every design detail as if you were there in person.”

For more information and to learn how to become involved in the project check out the special website set up at www.friendsofanchor20for20.org.