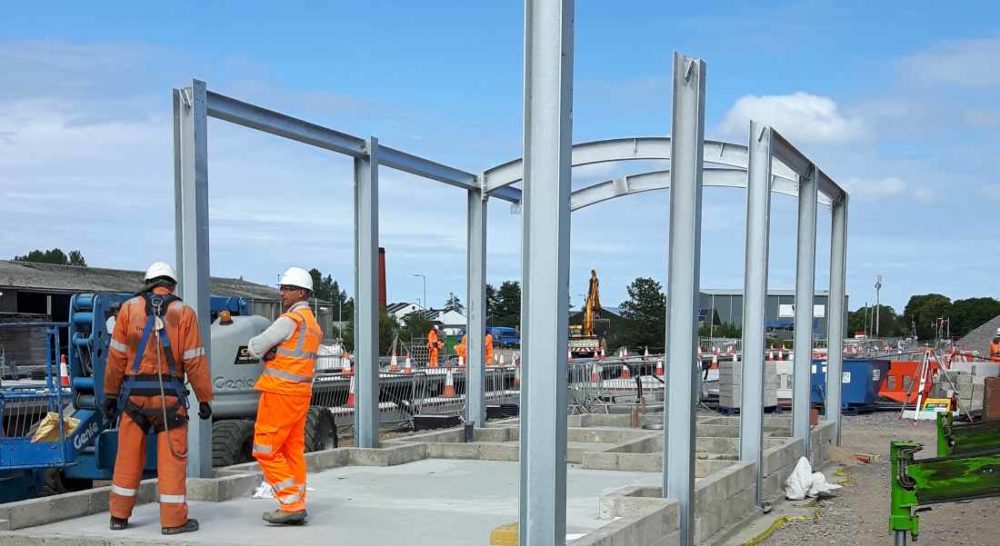 A MORAY ENGINEERING and construction company did not need to travel far from their Forres base to fulfil their latest high-profile contract.

AJ Engineering was given the task of designing, fabricating and installing the new railway station and footbridge in Forres – and the job is being done within sight of the office of the firm’s general manager!

The works on the station building have been contracted by Global Infrastructure while BAM Nuttall has appointed AJ Engineering to handle the new footbridge.

Graham Alexander, general manager for AJ Engineering, said it was a fascinating project to work on and joked it was easy for him as he has a bird’s eye view of the site from his office as well as from his house at Waterford.

He said: “You can’t get much more local than this – I can see and hear the works going on all day long, so I am in a position to keep an eye on things all the time.

“Joking aside though, to be working on a project so near to our depot, and my house, is fantastic and makes sense logistically. To be working with BAM Nuttall and Global Infrastructure on yet another landmark project just goes to cement that strong working relationship that we have even further. “The public obviously see this as one large project, but for us it is two separate contracts which happen to be on the same site. We have two project managers working on this at the moment to ensure that all the tight deadlines are met and that we arrange our activities so all the follow-on trades can also get their work done too.”

Work on the station building is expected to be completed by the middle of this month, but while there are benefits of the firm’s fabrication yard being practically on site, Gary Moir, project manager for the building, explained there are challenges.

He said: “We began the design for the work in April and we were on site on June 21. The project is going well, but there are challenges to overcome.

“For example, the new railway tracks are being laid at the same time so that restricts our access. The installation is also weather dependent.

“The design is great though. The station building has a curved roof and a built-up insulated system. This will mean a longer installation time and due to its curved design, the roof will prove more challenging to lay but it will look more impressive when it is finished.

“It is very satisfying to be involved in an important local project – the new modern, state of the art station will benefit the town greatly and it is rewarding to know we were involved with providing this service for the public.

“I drive past the new station every day on my way to work, it’s satisfying to know you’ve been involved in projects like this that benefit the public.”

Project manager for the Forres footbridge is Gary Moyes. Speaking about working once again with BAM Nuttall, he said: “It is good to maintain our excellent working relationship with BAM Nuttall, with whom we have completed a number of successful infrastructure scopes over the years.

“The design works for the footbridge began in March and we will begin on-site erection at the start of July. Logistically, the close proximity to the work site has additional benefits and as we are Forres based company, it is good to be involved in a high profile local project which will benefit the community and improve access for the large number of visitors Forres attracts throughout the year.”