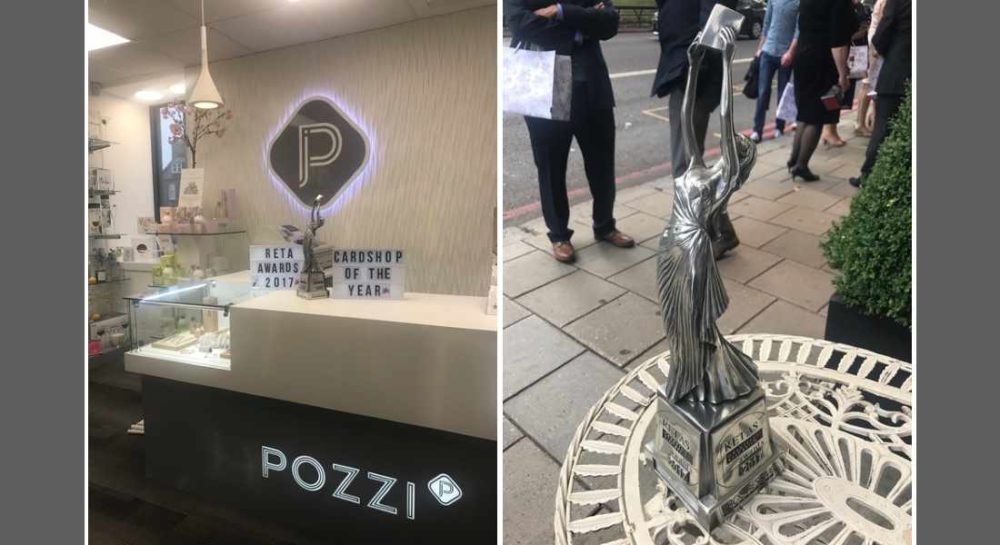 A MORAY BUSINESS with outlets in Elgin and Buckie has emerged victorious in a major trade industry magazine awards at the Dorchester Hotel in London.

J.P. Pozzi in Buckie and Bijou in Elgin have won the RETA Award for Best Independent Greetings Card retailer in Scotland.

RETA’s are given by the leading industry magazine Progressive Greetings – the recipients are decided by votes from their peers in the industry including publishers, agents, sales representatives and readers.

J.P. Pozzi won the first RETA in 2005 and did so again in 2008 and 2011 – a stellar year when they also scooped the overall greeting card retailer award. They won again in 2013 – and now the 2017 award takes them to six RETA, the most any business in the industry has achieved.

This year the award highlighted the new and innovative work with the card department at the newly refurbished J.P.Pozzi stores in High Street Buckie.

Both have gone through refits with the original store on 8 High Street having a complete transformation to now offer a coffee shop, food to go, newspapers and of course cards, gifts and stationery. This store features card walls that were designed specifically for us using a new system that was developed by Axiom.

Owner David Robertson said: “Winning the award again feels like a little rubber stamp to say yes we are still right at the forefront of cards in the UK.

“I am also very proud of our staff across all our buildings who work hard to provide excellent personal service. In these tough retail trading in conditions that is the one thing that can really set you apart from others and the internet.

“Also, I am very pleased for my parents as it is further vindication of all their hard work over the last near-30 years.”

Mr Robertson added that he was delighted when Richard Lochhead MSP raised their success at the Scottish Parliament.