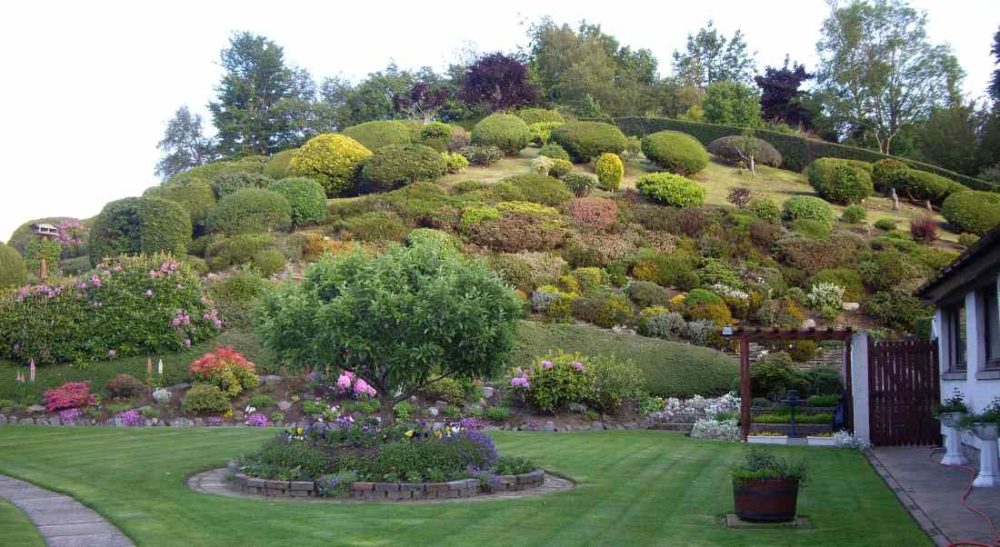 ONE OF MORAY’S most eye-catching private gardens is to be opened to the public as part of a fundraising effort for Maggie’s Highland cancer support.

Alex and Agnes Miele’s home was created in 1975 on the slopes of ‘Breakback Hill’ – an appropriate name, according to the couple, given the work that has gone into creating their garden!

Known more locally as the ‘Garden on the Hill’, the stunning San Venditto garden in Forres is the result of many years of hard work. The hillside was laid out in terraces with shallow ditches at each level – which act both as drainage and to catch the ‘rubbish’ from above.

Agnes told insideMORAY: “Over the years various shrubs were planted as were quite a few conifers which have been kept at a workable height and pruned at the end of the season.

The front garden is really a ‘spring’ garden with azaleas and rhododendrons – and quite an impressive display going up the drive – we have daffodils in the spring and various bedding plants during the summer.

“Surprisingly there is a large lawn area at the rear with flowering shrubs and a central rockery with an apple tree in the centre.

“The whole property is surrounded by hedges – the front has a golden privet which is maintained regularly and is our pride and joy. On the west side – from bottom of the hill to the top and down the south side – is a cotoneaster hedge approximately 5ft high and 3ft wide and then to the east a leylandii hedge – again 6ft tall and 3ft wide.”

The hedges along with everything in the garden is maintained by the owners themselves, the couple both now in their eighties, although they do employ one young man who trims the grass on the hill.

Agnes added: “There are also two vegetable plots, one behind the hedge on the eastern side that originally started off as the composite heap, the other on the southern side with fruit trees and a large strawberry patch.”

Members of the public visiting the garden on its open day will enjoy its most outstanding feature, according to Mrs Miele – the views: “While situating inside the town boundaries we have complete privacy – but the views extend north east to Findhorn Bay and to the north the spiral peaks of St Leonards, the Town Clock and St Lawrence.”

San Venditto has hosted a visit from the Beechgrove Garden team led by Jim McColl way back in 2004 – and has had a lot of work since.

The Open Garden Day is on Sunday, August 13 from 2pm until 5pm.