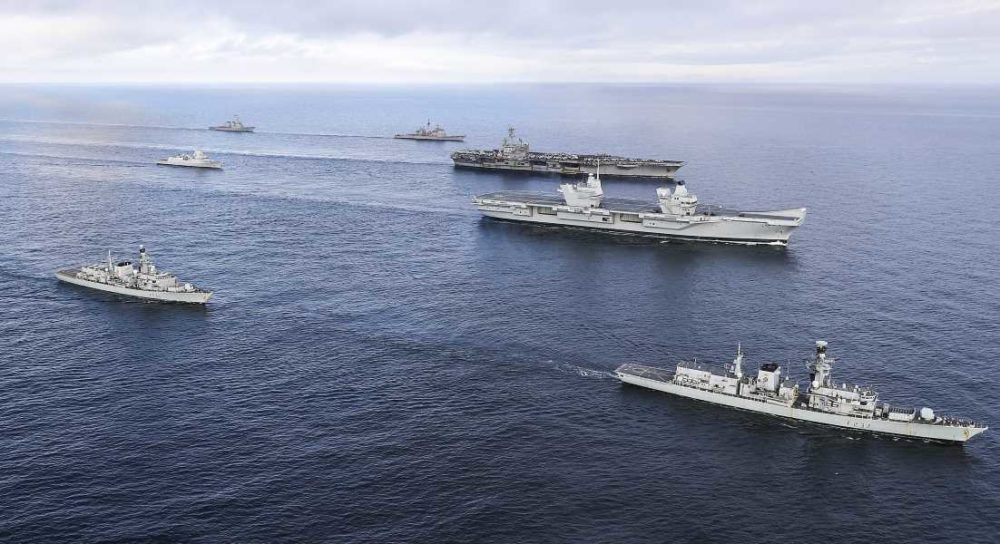 AS HMS QUEEN ELIZABETH has tied up at Invergordon ahead of her final preparations to head away from Moray waters to her home port, she had one major task to undertake this week.

That was to team up with the massive carrier the USS George HW Bush and her strike group – allowing Royal Navy personnel to see how the US Navy does the job.

The Nimitz-class US carrier has had more than 60 Royal Navy sailors and Royal Marines on board, working with their US counterparts to hone carrier strike skills ahead of HMS Queen Elizabeth’s entry into service.

The series of war games have seen the Commander of the UK Carrier Strike Group, Commodore Andrew Betton, and his team direct jets, firepower and personnel across the task group for the last ten days to ensure readiness for the UK’s own carrier strike capability.

During a pause in the exercise’s high tempo activities, there was a chance for HMS Queen Elizabeth to join the carrier strike group for a brief period as she continues her own contractor sea trials ahead of her much-anticipated first entry into her new home port in Portsmouth, expected to be in just under two weeks.

Captain Jerry Kyd, HMS Queen Elizabeth’s Commanding Officer, said: “The USS George HW Bush battle group is an awesome embodiment of maritime power projection. Given that the United Kingdom’s Carrier Strike Group Commander and his staff are embedded on board the US carrier for Saxon Warrior shows the closeness of our relationship with the US Navy and the importance that both nations place on the delivery of the UK’s Carrier Strike programme. “HMS Queen Elizabeth is at the start of her journey to generate to full warfighting capability, but we are working hard to ready ourselves to take our place in operations and the line of battle alongside our closest allies.”

Captain Ken Houlberg, Chief of Staff to the Commander of the UK Carrier Strike Group, said: “The US Navy, out of huge generosity, has given us the whole of their carrier strike group so that we can practice the command and control of a carrier doing these operations in British waters – so that when HMS Queen Elizabeth comes into service later this year we will be well on the way to forming our own carrier strike capability.”

The exercise, which has been at play for nearly a week, has seen UK staff work with their American counterparts to fight off a series of simulated threats from enemy forces, using all the air, surface and sub-surface assets of the entire task group. There are 15 ships from across NATO taking part in the exercise, called Exercise Saxon Warrior, with more than 100 aircraft and nearly 10,000 people.

UK Defence Secretary Sir Michael Fallon announced on Monday that Britain’s new aircraft carrier HMS Queen Elizabeth, the largest warship ever built for the Royal Navy, is set to enter her new home in Portsmouth in around two weeks – as reported by insideMORAY a week ago.

Weather conditions mean the exact date of the historic moment is yet to be confirmed, the window for entry will open next Thursday 17 August, with her arrival expected to be no later than the following Tuesday 22 August.