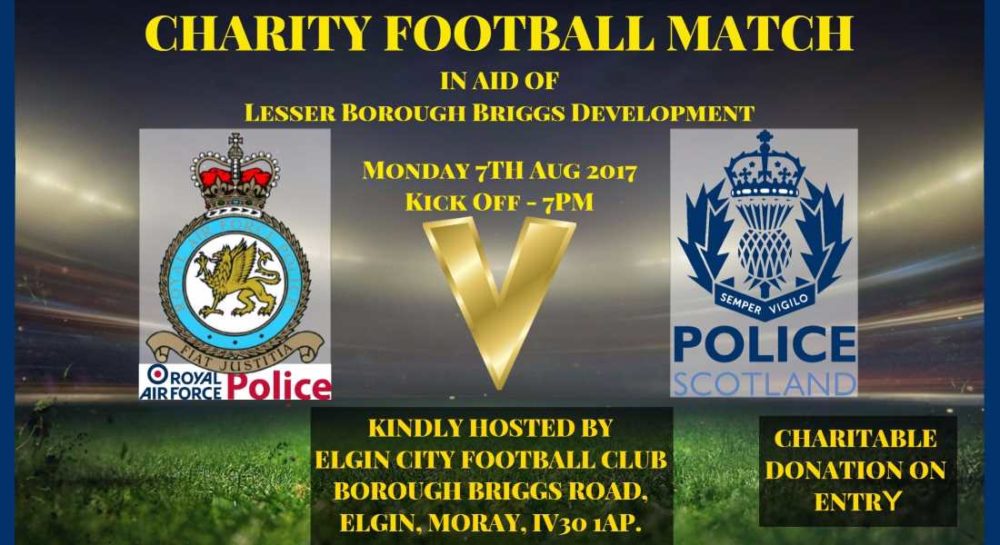 THE LAW WILL certainly be on hand at a football match taking place at Borough Briggs next week – with at least 22 officers on the field of play!

Monday evening will see the annual RAF Police versus Police Scotland match at the home of Elgin City FC – with the new Lesser Borough Briggs Community Trust the beneficiaries.

Organised by Sergeant Dave Halil and Corporal Jamie Barrow of the RAF Police along with PC Rory Fraser from Police Scotland, it is hoped a bumper crowd will support the law officers as they help a new Trust that seeks to promote youth football in Moray.

Sergeant Halil said: “We try to have a football match against our Police Scotland colleagues every year. We work really closely with them to ensure the safety and security of not just the RAF base, and RAF families in Lossiemouth and Elgin, but the whole community in the area.

“We weren’t able to organise the match last year because of work commitments, but we have a good record against Police Scotland, so hopefully we’ll have a good match and give the crowd an entertaining game.”

The Lesser Borough Briggs Community Trust (LBBCT) are raising money with the aim of buying common good land next to Elgin City FC. The LBBCT want to improve and invest in the area, and create an all-weather pitch that can be used by any sports clubs and teams from the Elgin community.

Gates open at 6pm with kick off at 7pm – and while there is no entry fee fans will be asked to make a donation to the LBBCT. There will be half time entertainment from the RAF Lossiemouth Pipes and Drums, and after the match the trophy, named the Jewel of Moray, will be presented to the winning team.