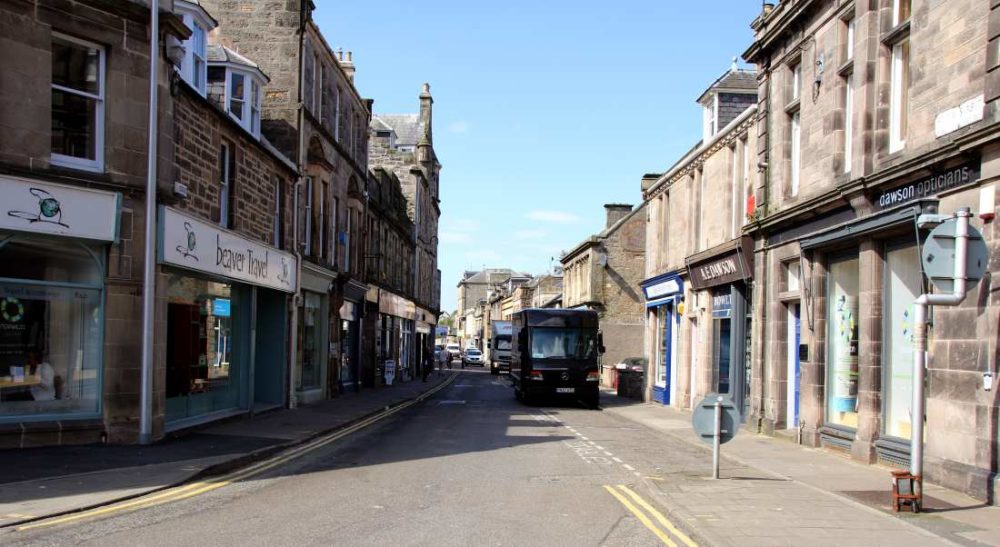 Well Barry Jarvis certainly caused a stir in our social media group yesterday – today we have the second half of his walk around Elgin, insisting that the town is not so bereft of activity that many imply…. THOROUGHLY IMPRESSED WITH the entrepreneurship and ingenuity shown by the gaming group I spoke of yesterday, I bid them farewell as they were heading onward to the local youth café.

There they would continue their gaming adventures before heading out on some digital monster hunting expedition later.

It was at this point I remembered that I had offered up a bottle of malt that I had sitting spare to a local raffle and decided that it would be best if I replaced this so as not to be caught short at some point in the future.

Thankfully there was a locally owned shop that specialised in local malts and other delicacies. I must admit I may have spent a fair chunk of my time inspecting the extensive collection and inquiring with the staff about which were best fitted to my own individual tastes and requirements.

At this point I headed down another lane with the intention of viewing rental properties to see if there was anything that may pique my interest, I was however side-tracked by another new store which sold a huge range of curios and gifts relating to comic books and related mediums.

I was again impressed by the ingenuity of this as it was certainly something I had not seen in Elgin before and had heard precious little about its existence before now.

As it was getting close to lunch time I decided to visit a cafe for a quick bite to eat and helpfully enough my next location had both a café and one of the items that I had travelled up the street for.

Having smashed my Terramundi jar the night before I required a new one to start again the process of saving cash for a future adventure. So Hhaving suitably been suitably fed and watered I headed down onto the High Street where I was greeted by the sound of music.

A local group having been frustrated with the lack of opportunities for aspiring artists in the area had taken it upon themselves to set up an afternoon showcase for musicians. I was impressed with the standard of performers and by tenacity of the group who were not content just sitting and complaining about issues but actually willing to step up and do something about it.

By the time this was over it was fairly late in the day and I wandered along popped in past a local butcher to pick up something for my dinner, grabbed a quick pint at my starting location and looked back at what was a busy but productive day. On my way home I popped in past our independent cinema to see what was on and discovered that they were having a showing of one of my favourite classic films on their recently created third screen – so bought tickets for that evening, so rather than go home I returned to the bar I started my journey for a fly pint and quick bite to eat to whittle away the time up until the film started.

OK, so some of this may be a little rosy in terms of outlook and there are a number of empty shops and even different shops from the ones we remember when we were growing up. But equally there are any number of alternative routes or legs to the journey that I could have included from the new Tea room in Batchen street to right next door and the pretty, unique, bespoke stationary store and men’s grooming shop opposite both.

We are surrounded by potential, opportunity and ingenuity in our enterprise. I recently read a social media post from one such long standing business that estimated that a significant number of its patrons came not only from outwith Elgin but outwith Moray to travel for their unique expertise and insight.

The problem we have though is we have allowed ourselves to get into a mindset of maudlin negativity about what is a beautiful and historic town centre. Following the recent addition of the Dandy Lion a procession of individuals took turns to attack not just the sculpture but also the town generally.

I can accept that it is pretty far from ideal at the moment but what are we ever going to achieve by relentlessly harping back to a bygone era stuck in a dream those halcyon days will ever return and if we continue to ignore what we have we will inevitably loose that as well.

I don’t pretend to have the answers and certainly don’t have the resource to make reclaim the city centre from its current state, but it is obvious that we need to let go of the past, we need an open welcoming attitude to new business and alternative visitor experiences.

We need a suitable medium sized venue for the arts and conferences that can encourage creative types to showcase their talents in the area – and can provide an alternative to the current evening scene in Elgin that could be accused of being slightly dated. We also need to embrace our heritage, shout about the history and use it to our advantage. This I believe was the original intention of the Castle to Cathedral to Cashmere project, and I believe that it is most certainly a sensible way to go.

That and perhaps a proper review of the rates system to better reflect the current era of out of town shopping could go some distance to supporting smaller businesses, to take a chance and could encourage tourists to make Elgin a part of the visit to the Highlands.

I’ll end with this, I grew up in Elgin and chose to come back here after studying at University (twice in fact) and I share the frustrations of many with regards to the current state of the High Street – but simply complaining on social media about it will not change anything.

We need to come together and support what we have to show others that opening in Elgin can be viable and that the risk is worth it because no one else is going to shout about Elgin and nor should they if we can’t ourselves.

Part One of Barry’s piece can be found here.