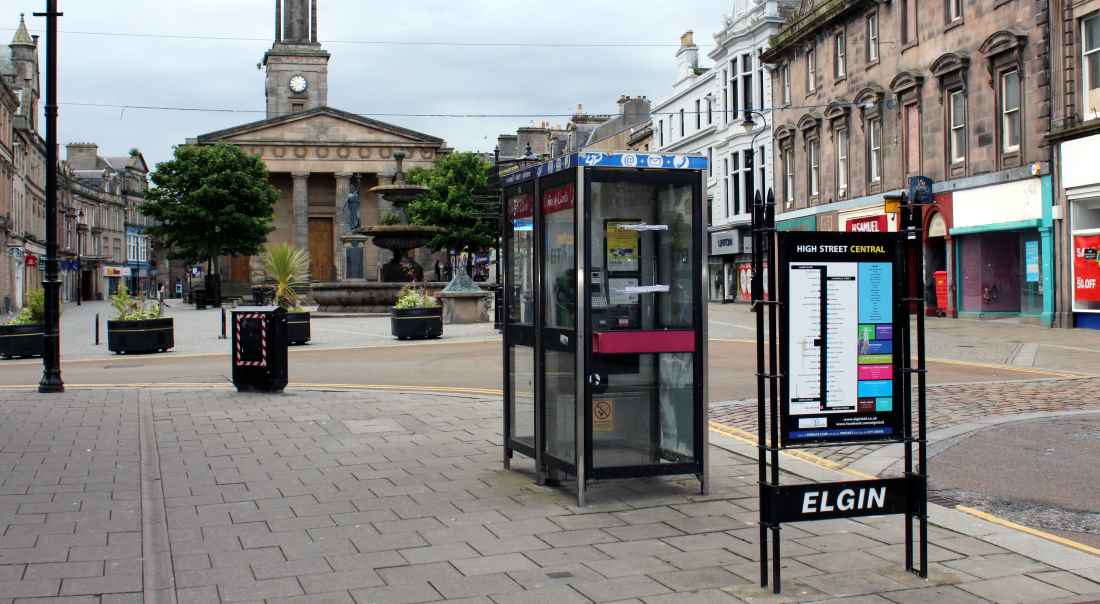 There is a lot going on around Elgin these days – despite the negativity that all too often seems to surround Moray’s main town. Today we have part one of a two-part feature from former Moray Councillor Barry Jarvis providing a personal viewpoint on his home town. I READ A LOT on how awful Elgin is and how nobody would ever want to go there because there is “nothing to do” – so rather than continuing to argue, I thought I would imagine a day out in Elgin that I could have.

Some of this was written a little while ago so some of the points are a little archaic now – however, I am sure it does not detract from the point I am attempting to make. One admission before I start though, I find the Dandy Lion quite charming!

I started off my day at the a salubriously refurbished cafe come bar come eatery down one of Elgin’s historic closes (once a feature of many towns and cities, however, now banished to the annuls of time by the ongoing march of change).

I had a lovely breakfast made with locally sourced food and took advantage of the free WiFi to check the news and local goings on via my tablet. Thoroughly refreshed and ready for the day ahead I moved on from here to a video games store.

While this is a national store I found a local gaming group ensconced, taking part in a demonstration one of the newest additions to the platforms gaming catalogue. They are, they explained, a group who regularly met to battle or co-operate on the latest games and to discuss their mutual interests with like-minded individuals.

All of this was supported by a friendly staff team in the store who recognized the value not only of this group as a regular customer base but also in the opportunity it represents to showcase an support promotions and events in the store.

Having realised that it has been a long time since I properly engaged with any gaming platform, and alas will continue not to until the adventures of the Breath of the Wild calls me back, I moved on with my main activities of the day.

I headed the short distance from the store to my local bank. Remembering fondly that this was in fact the first ever bank that I had opened an account and had not actually changed in anything other than branding since. I had a brief appointment with an adviser who as ever kept me aware of the various products and services available should they be required – and as ever in this situation I politely declined but left assurances that should the need occur I would return.

I deposited a small amount of coins that had been collected via one of those Terramundi pots that I had gleefully smashed the night before into my savings account and headed across the road to the barbers.

The barber was a very affable fella who I had regularly been to over the years so was aware of my particular style and requirements for my haircut – which is always helpful as these situations can be stressful otherwise.

Whilst cutting my hair we chatted about how the business had grown from being in effect just him with a chair to now having four separate chairs, additional members of staff and more business than he can shake a cut throat razor at. Not that that particular course of action would be advisable.
Suitably trimmed and shaven I ventured onwards stopping briefly in a small cafe/travel agent for a quick refreshing cuppa and perusal of potential holiday destinations.

Following this briefest of stops I ventured into a nearby bookshop that I I was aware was still relatively independently owned and spent some time looking through their unsurprisingly broad and varied selection.

Having resisted the urge to splurge too much on literary indulgences (but having spent enough to ensure that future train journeys to work would not drag on too long) I headed onward and discovered a craft shop that had recently moved from another location in town. I was pleasantly surprised by the fact that it still existed because only that morning I had read that the building was empty and that it was a further sign of the terminal decline of the City Centre! I quickly realised that while the items were brilliant to see, and would be fantastic to have, I had no space in my current accommodation to give any of the items the proper prominence they deserve.

Next up on my adventure was the music store next door where I was looking for a CD as a gift from a friend who had resolutely stuck to their guns and refused to go full digital before they absolutely had to. Once I had the CD in hand I moved onwards and spotted further down the street that the group previously in the video game store were now heading towards premises on another street.

I stopped again to say hello to see what had dragged them to their new location and they explained that an enterprising local businessman had picked up on one of the latest video game trends – and had designed a number of items that tied in and allowed the individuals to proudly display their chosen in game factions’ logo for all to see.

Find out where Barry found himself next in the grand tour of ‘nothing to do’ Elgin tomorrow morning….