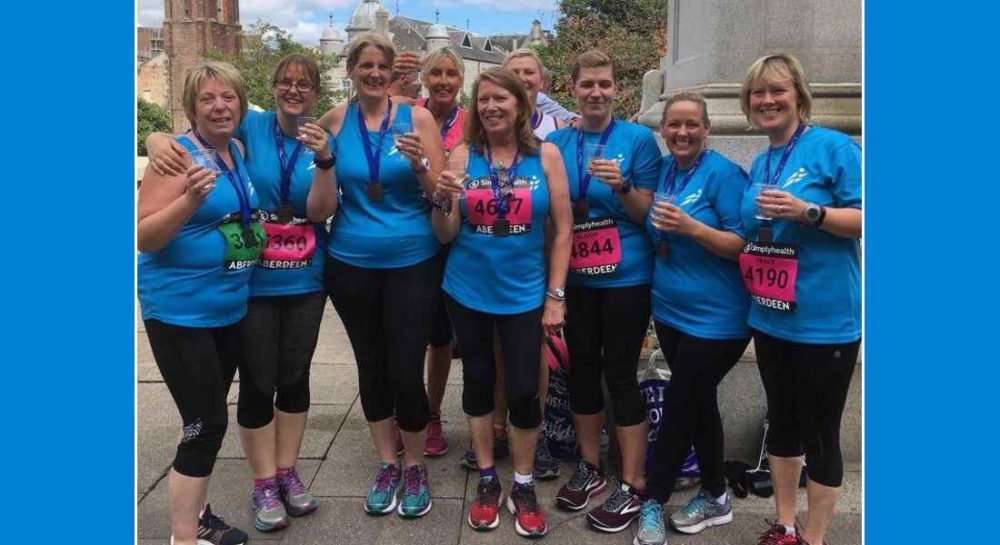 SEVEN DETERMINED MORAY Ladies have been recovering from their first ever half-marathon run at the weekend.

The group from Lossiemouth joined 8000 other for the inaugural Aberdeen Great Run – and they had particular cause to be pleased with themselves.

Up until just three years ago all seven were very much non-runners in various degrees of fitness from couch potatoes to occasional gym attenders. What then changed was that they jointly made the decision to join JogScotland – and their fun, friendly groups that are perfect at getting people to get active for the first time.

Currently there are 397 such groups throughout Scotland – and Moray alone has 10 JogScotland groups.

Looking back on the programme Sheila said: “On week one of the course we were told at the end of 10 weeks you will be able to run for 15 minutes. Well, after wheezing round for a few minutes that first day, it seems highly unlikely. “But sure enough, week 10 saw us plodding round for 15 minutes and even able to talk whilst doing so. I should say we don’t call it running really, it goes from granny-shuffling, to plodding to jogging to running (of sorts).

“That’s when the running bug kicks in for many, and all of a sudden a 5k seems possible, and once achieved, the 10k and half marathon beckons.”

For the past four months the group have been training hard for the Aberdeen event, Sheila saying: “We could be seen pounding the streets in the early mornings, trying to stick to a training regime that would get us to the distance, whilst still getting on with everyday life.

“We range in age from 30s to 60s – we are all shapes and sizes, but our common aim of taking part in that half marathon spurred us on. I’m delighted to say we all completed the course, which was long, hilly in places, cobbled in others, and which took place on Aberdeen’s only summer’s day.

“But the atmosphere was terrific, bands playing along the route, 1000s of people encouraging the runners, and all organised and stewarded professionally.”

Now the post-event aches and pains are wearing off – and the pride of raising at least £2300 for charities including Alzheimer’s Scotland, Moray Sands, Macmillan, Parkinson’s, ChSS, CLAN and Moray Women’s Aid is to the fore.

Sheila concluded: “So I would say to anyone wishing to get fit in a relaxed, sociable and supportive environment, think about joining your local JogScotland group.

There is a beginner’s course starting in Lossiemouth on Monday, September 4, see http://jogscotland.org.uk for information and registration, or text 07940 17116.”