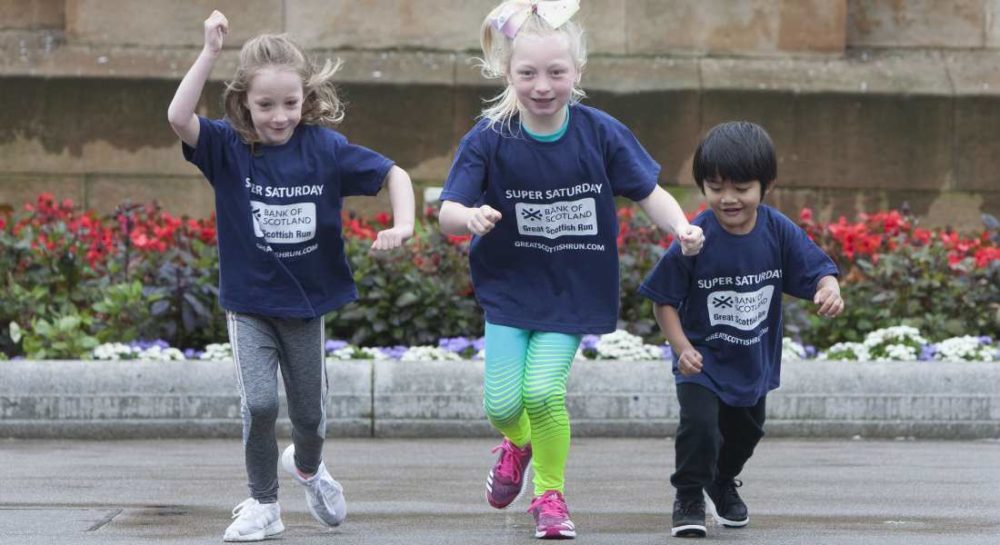 The trio gathered recently ahead of the event which will see kids flock to George Square in Glasgow for the Family Mile, Junior Run and Toddler Dash on September 30.

Adam, five, who is originally from Malaysia, will be taking on the Family Mile. While Anna will tackle the Toddler Dash for the fifth and final time. The five-year-old, born 14 weeks premature, took part at just 18 months old and proudly crossed the finish line with the help of dad Alan.

Freya, of Glasgow, gets set to prove that anything is possible after signing up to the Family Mile following two heart operations. The seven-year-old, who was born with a heart condition, will be going the extra mile to raise funds for the Children’s Hospital Charity.

Alex Jackson, from organisers the Great Run Company, said: “It’s fantastic to see so many children participating this year and we would love to see a few more from Moray. From toddlers to teenagers, Super Saturday offers something for everyone regardless of ability.

“Whether it’s the Toddler Dash, Family Mile or Junior Run, it’s the taking part that really counts. With just over six weeks to go until the Bank of Scotland Great Scottish Run, we’d urge parents to sign children up as soon as possible to avoid disappointment.” Scotland’s biggest weekend of running will see participants follow both 10k and half marathon routes on Sunday October 1, taking in some of Glasgow’s famous landmarks. Runners will set off at George Square before reaching the tree lined finish straight in the shadow of Nelson’s Monument at Glasgow Green.

Over 30,000 runners of all abilities are set to participate in the three-day event, with Sunday’s 10k and half marathon bringing the weekend to a close.

“It’s fantastic to see thousands of families and young people flock to Glasgow city centre each year to take part in these fun events ahead of the big race day. The event supports our public commitment to continue help communities prosper and we are proud to be involved.”

For more information and to enter the Bank of Scotland Great Scottish Run visit www.greatscottishrun.com.