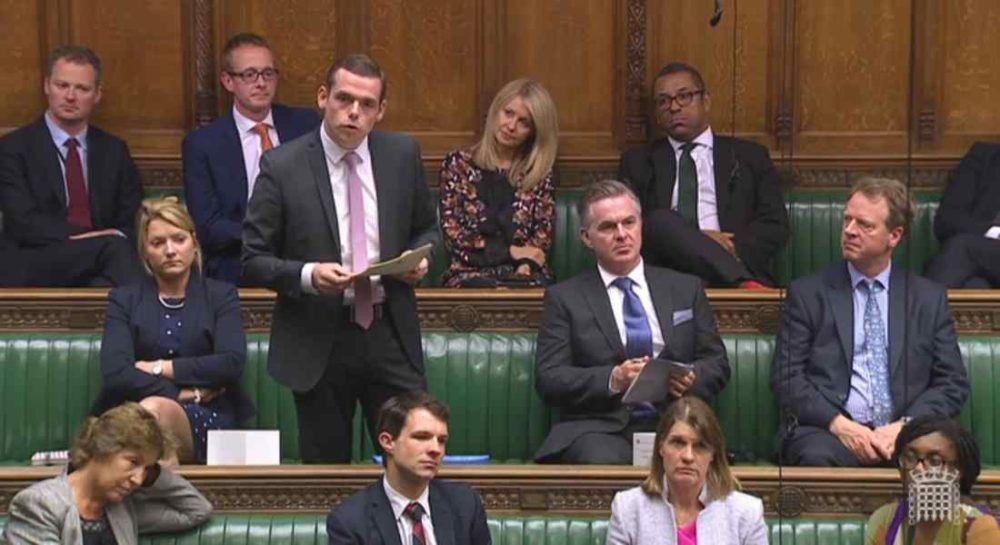 MORAY’S MP HAS DECLARED war on unscrupulous online businesses and delivery agents over their charging a premium for deliveries to the region – or even refusing to deliver at all.

Douglas Ross used his maiden speech in the House of Commons on Tuesday to fire a warning broadside to companies that appear to believe Moray’s IV or AB postcodes indicate it to be a far-flung Island rather than part of the UK mainland.

The MP told the Parliament: “I live in Moray, I know that it is part of mainland UK. It is just unfortunate that many businesses and delivery firms are not quite as observant.

“They believe that because we have an AB or IV Postcode that we live in some far-flung Island and they duly add extortionate delivery charges or in some cases refuse to deliver at all. Not only is that dumb, it is disrespectful.

“It is not just an inconvenience, it is inexcusable – it is not right, it is just plain wrong. There is a solution to this but it needs companies and delivery firms to work together, that way Moray consumers can feel as valued as any other in the UK. It is a simple request but one that would make a big difference in our area.” “To make sure the Moray Growth Deal truly delivers what people want and expect, the council is encouraging individuals in the community to respond to its survey to shape this growth deal.”

Following the speech, Mr Ross told insideMORAY: “I was very proud to be elected as MP for Moray and to be able to make a speech from Westminster extolling the virtues of the area where I was born and grew up.

“It is very important to me that Moray gets recognition for the wonderful area it is and for what it can offer to the rest of the UK. Not only has it got a rich bounty in terms of produce and tourism attractions, but it hosts world class businesses which can hold their own in the export market and have made their mark around the world.

“And as well as being the home of whisky and good agricultural produce, Moray is rich in terms of scenery and wildlife, with a wonderful coastline and fantastic hospitality. It also has a proud military tradition with two military bases within its borders, hosting both the Army and the RAF. These are assets that are worth boasting about.”

As well as the Moray Growth Deal and fairer delivery charges, the MP called said he will fight for better Broadband in Moray.

He concluded: “Moray has a lot going for it, and as the son of a farm worker and a school cook, I firmly believe with the right support and ambition Moray can go all the way.”