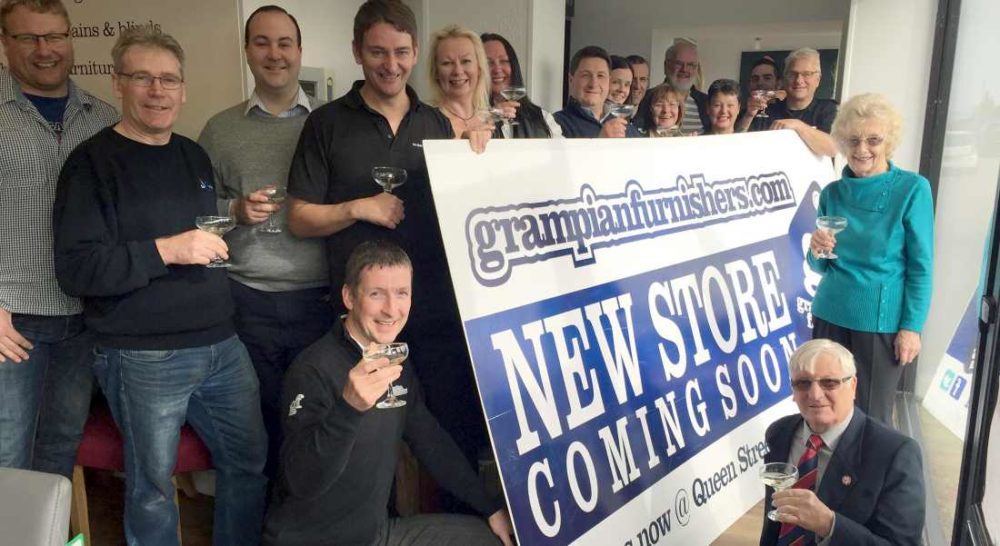 BUSINESSMAN ROYCE CLARK demonstrated the joy of a man who had just achieved one of his dreams – and would not be forced out of Moray to expand his family business.

It is unlikely the Lossiemouth-based owner of Grampian Furnishers has ever faced such a mammoth task, years of work to find premises suitable for expansion at one point looking likely to take the firm to Aberdeen or Inverness.

In the end it was down to the decision of six councillors over two – and now the £3.5million investment will be made – and of more importance perhaps, Grampian Furnishings will remain in Moray.

Immediately after the decision Mr Clark told insideMORAY: “Relief, shock – for that last half hour I did not think it was going to go through, three of the councillors were really asking a lot of questions – some of which had already been answered earlier.

“I was not quite sure that they were understanding the entire concept. But I was glad to see that politics does actually get laid to one side in these meetings with our submission going through.

“I was surprised when it went through – I thought it was going to be very tight but was delighted at the 6-2 margin. I was pleasantly surprised and delighted but it was purely a business and economics decision and our councillors did their job, which is all we can ask for.

“For now, a celebratory drink first and we are ready to go with the demolition for which we already had permission, so people will see a bit of activity on site in the next couple of weeks.”

There was disappointment, however, from Elgin BID last night, who had fought against the move from the outset – and against strong public opinion stuck to their objection that agreeing the plan would open the door to another out-of-town retail park.

In a statement Elgin BID manager Gill Neil said: “The BID Board of Directors are disappointed in the decision made by the Moray Council Planning Committee, to pass the application made by Grampian Furnishers, which will allow the progression of a new retail out of town development on the outskirts of Elgin.

“We find it difficult to understand why the Local Authority’s own officers would recommend passing an application that so clearly contravenes their own polices – policies that were only last year ratified as appropriate and essential for the wellbeing of the City Centre.

“Throughout this application process, we have made it clear that we were in no way objecting to Grampian Furnishers, our objection always related to the site of the proposed development and to how it contravened the Moray Council’s polices and plans.

“As we have explained already one of the reasons that Elgin BID was created was to help the City Centre cope with the increasing pressures caused by the out of town retail developments. Originally granted permission by the Local Authority for the sale of large bulky goods, it is clearly evidenced that over the years the use of the retail parks has changed dramatically as Moray Council have passed applications for change of use and unit size. “The Moray Council has Plans and Policies in place for a reason, they are there to ensure everyone is treated in the same way, given the same opportunities, subject to the same rules and no one is given an unfair advantage. We simply asked for those rules to be observed and followed.”

Pointing to a report by a consultant had estimated half a million pounds would be lost to traders in the city centre, Elgin BID insisted that the decision would cause anxiety – particularly among small to medium enterprises.

Gill Neil added: “Those losses are compounded by an estimated loss of £1million in the retail park and a staggering £2.2million in Lossiemouth. Mr Clark did state that he had a business interested in taking over the Lossiemouth building, but was unwilling or unable to disclose who they were and more importantly what they do, so at this stage there is no assurance that the estimated £2.2 million loss will be reduced.”

Reacting to the Elgin BID statement, Royce Clark said that it simply repeated all the points raised during the hearing – and were largely discredited.  He said: “Many of the claims being made by Elgin BID were unfounded and that was demonstrated during the hearing, with the majority of Councillors agreeing with planning officials.

“We are now looking to the future with a great deal of confidence – the support we’ve had from the public throughout this process has been tremendous and has been a very humbling experience.”