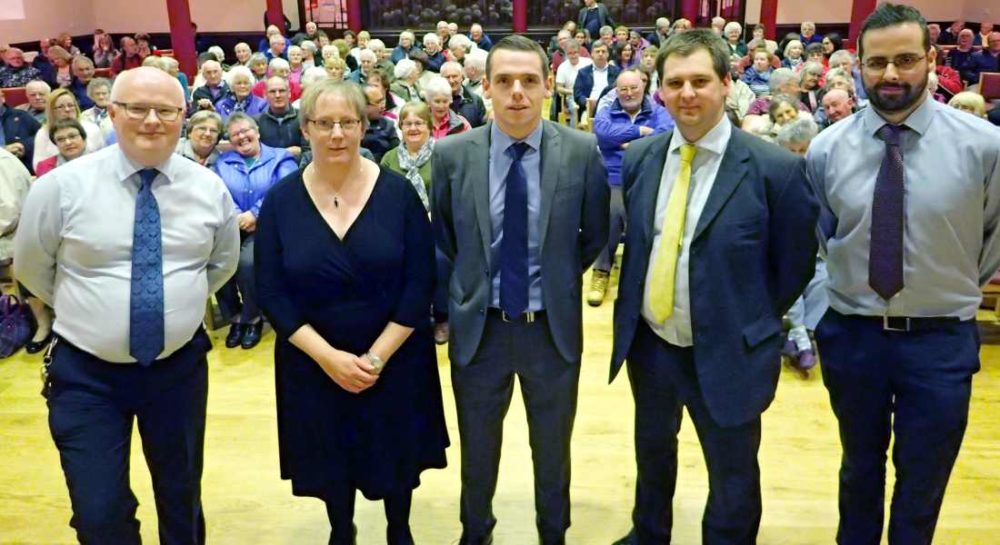 A PACKED PUBLIC MEETING on Thursday evening gathered in Elgin to discuss bus services in Moray with representatives from Stagecoach and Moray Council.

Douglas Ross MP called and chaired the gathering in St Giles Church of around 200 bus users – many of whom where forthright with their views.

Following the meeting Mr Ross said: “I convened this meeting after being contacted by many residents whose buses have been cancelled and find themselves without any provision at all.

“It was good to see so many people at the meeting and for them to have the opportunity to voice their frustrations directly to Stagecoach and the council’s public transport unit. There were many good ideas put forward about how a service could be run in some of the affected areas.

“I said at the meeting that we were never going to arrive at the start with no bus and leave a couple of hours later with one, but I am encouraged that both the bus company and the council representatives have agreed to go away and look at the suggestions that were put forward.”

The meeting reflected the “widespread concern” among many elderly residents, the MP concluded, in particular those living in Forbeshill in Forres, Bishopmill in Elgin and rural areas such as Newton and Roseisle, all of whom simply cannot manage without a bus service. “They are becoming isolated, find themselves having to pay for taxis to get to the doctors or just to meet up with friends at pensioner’s groups or enjoy arranged activities,” Mr Ross said, adding: “The response of local residents shows just how serious that concern is and I am very grateful that so many people came along to express their views and take part in the debate.

“It’s also ironic that many more contacted me ahead of the meeting to say they would have attended, but couldn’t get a bus to get them there. I think the representatives of the bus companies and Moray Council will have learnt a lot about how this issue affects peoples’ lives.”

Calling for a comprehensive review of bus provision across Moray and targeted action to fill in the gaps in the network, the MP added: “Too many local people have been cut off from vital services and the opportunities to meet friends and relatives.

“Elderly people, unable to drive or afford to run a car, are left isolated. There are younger people who now find it much more difficult to get to work or to college. We need to respond to this need and I will continue to work with all the agencies involved to make progress.

“While I know many people were frustrated with the answers at the meeting I will be contacting both Stagecoach and Moray Council with the main points from the meeting; this is an issue I intend to continue to raise as it is having a negative impact on too many people.”