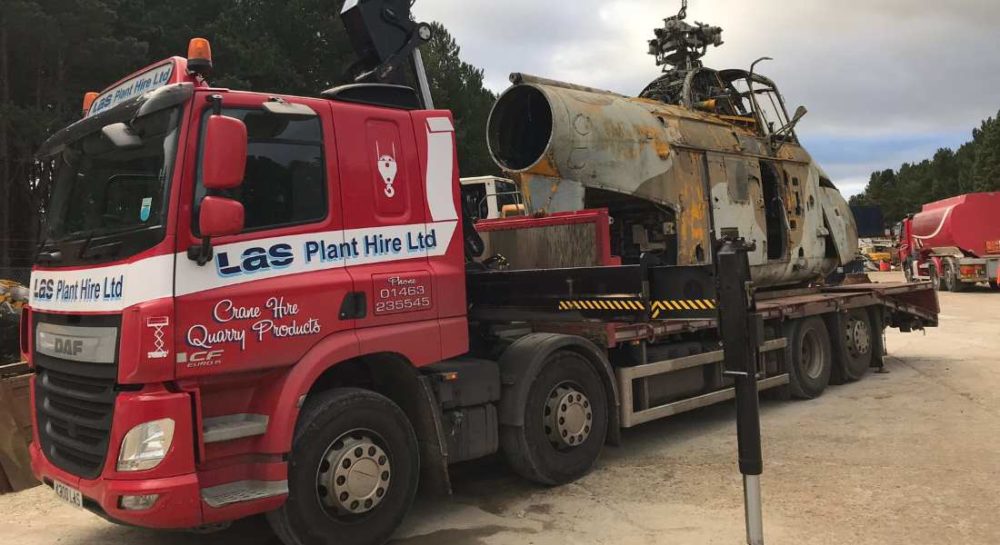 JUST IN TIME for the final weekend opening of the season, Morayvia took possession of their latest aircraft exhibit this week – a veteran Whirlwind HAR 10.

Moray’s Science, Technology and Aviation attraction has enjoyed another sparkling summer – one that saw the Kinloss site welcome a royal visitor alongside thousands who have marvelled at the range of exhibits on show.

Once again the help of LAS Plant Hire Ltd was called upon to deliver the Whirlwind XJ723 to the Kinloss site – meaning that Morayvia now boasts three former RAF Search and Rescue exhibits as the new attraction joins their Wessex and Sea King.

“This is a remarkable achievement for the project,” Morayvia’s Mark Mair told insideMORAY, adding: “I cannot think of any other museum in the world that has that collection – although it will take a little while to rebuild the Whirlwind, the team is certainly up for that challenge.

“The aircraft is significant in that it was the aircraft that George Medal recipient Flt Sgt John Reeson flew in to rescue the crew of the Sea Gem Oil Rig in 1965.

“He was able to aid in the rescue of 23 of the 32 man crew – a feat for which he received the ultimate bravery accolade. The aircraft will be now be fully restored to honour John, who passed away in November 2014.

“Once again Morayvia owe a debt to the team of volunteers who were present to help us recover the helicopter from Newcastle and bring it to Moray.”

Visit Morayvia online for details of the final opening weekend – and keep an eye out for any special winter opening events that will take place.