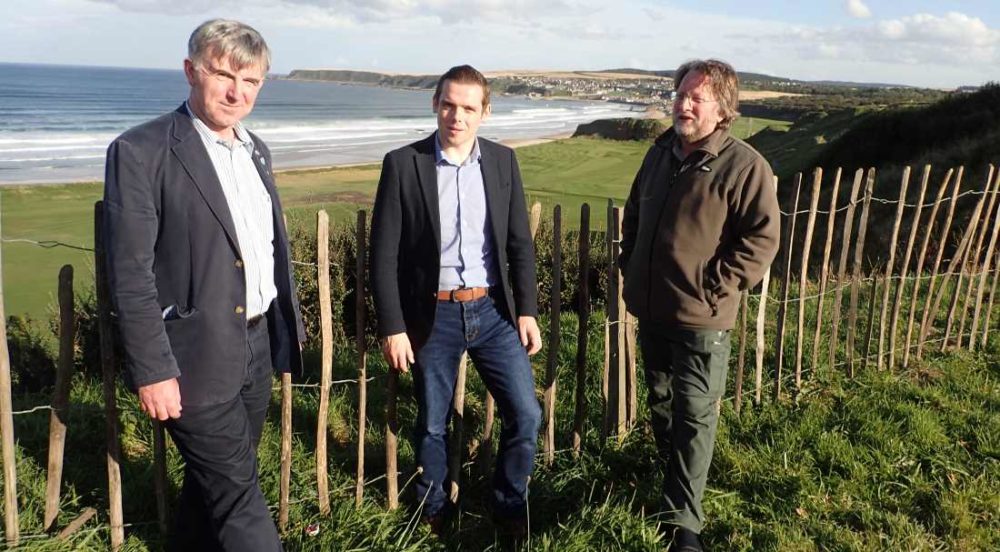 MORAY’S MP HAS been visiting residents in Portknockie to see for himself the extent of the damage caused by recent flooding in the coastal village.

Mr Ross met with local councillor Donald Gatt and Portknockie resident Rob Barsby to see what impact heavy rainfall had on the area. They visited several locations where the force of the water had caused landslips and damage to property.

Commenting afterwards the MP said: “I am very grateful to Donald and Rob for briefing me on the scale of the damage at Portknockie. The weather was perfect when we visited but I can only imagine what it was like on the day this happened.

“It is very clear to me that the drains and flood management resources that protect the community should be carefully assessed in the light of this event. I have been in contact with Moray Council about this and am keen to continue working with local councillors and residents as we seek to progress this issue.” Councillor Gatt added: “I have been in close contact with the relevant officers at Moray Council to ensure the necessary remedial work is carried out, but we also need to plan for future events. We live in an age of extreme weather events and need to take a precautionary approach.”

Mr Barsby, who has been looking at various ways to alleviate the issues that brought about a serious threat to homes on the cliff top overlooking the village, said: “I was very pleased that Douglas was able to visit the village and see for himself the impact of the flooding.

“Portknockie is one of several communities along the Moray and Aberdeenshire coast to have been affected in this way. Like other residents I was concerned by the lack of maintenance to our drainage system, with many drains appearing to be completely blocked.

“It is very important that our elected representatives make themselves fully aware of what is going on in our communities and it is good to see Douglas and Donald taking such an interest.”