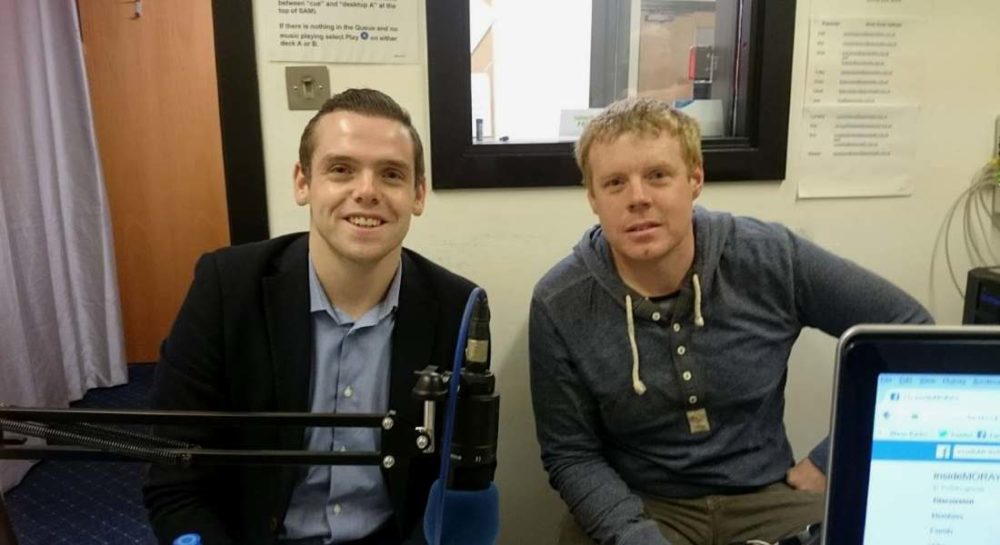 CONSERVATIVE MP DOUGLAS ROSS has given the clearest indication yet that he will defy any party whip and speak out in favour of the campaign for a better deal sought by women pensioners.

Questions have been asked of the Moray MP since his election in May, with accusations that he had turned his back on the WASPI campaign despite having signed a pledge to support them.

However, on the weekly Wave Newsbeat radio show provided by insideMORAY through our local hospital and community radio broadcaster, Mr Ross answered a question from a listener on the subject – and hit back at those who said his support had cooled.

He said: “I’ve always been quite independently minded, and I know there is a question later on about WASPI – I was the only Conservative candidate to support the WASPI campaign, which does differentiate me from my colleagues so when that comes up to a vote I won’t be supporting my party on that.”

He added: “I’ve also had Emails from the campaign group today about the Government’s response to a petition that had been submitted to the UK Government.

“I am very disappointed with the UK Government’s response and I have made that clear to Government ministers already. The question that was submitted was how do I propose to fight for the WASPI women as I agreed to do during the election campaign.

“I have been heavily criticised on the front page of the National with a yellow card next to me because I did not speak in the WASPI debate in Westminster.

“I think in the last two-years of Parliament there was something like 16 debates on WASPI – so I know I will have an opportunity to do it. The reason I did not speak in the debate earlier this year was because I had not done my maiden speech, technically I could have done that in the debate – but speakers were limited to two minutes and it was in Westminster Hall, I wanted my first time speaking as an MP in the House of Commons chamber and I wanted to spend more than two minutes.

“So, anyone who has read the publicity from my political opponents and others who think I’ve suddenly, once elected, given up on the WASPI women should think again because I am strongly supporting their campaign.

“It does put me at odds with my party and ministers within my party but they can take an assurance tonight and in everything I continue to do. I am at the UK Conservative Conference in Manchester next week and one of my meetings is with the WASPI campaign. I have no problem with meeting them at any time, any place because I believe they have a strong campaign and a strong message that we need to get through to government and that is what I intend to do as Moray’s MP.”

He said: “PIP is an interesting one, it replaced disability living allowance which was 20 years old, the system had not changed and the problem with the DLA (disabled living allowance) was that 71% of people on DLA remained on DLA for life.

“Their circumstances could change but once they were on DLA their payments did not change – so they could have more severe conditions but it still did not change. That meant hundreds of millions of pounds of over and under payments were being made, what the UK Government is trying to do is to ensure that money is targeted to those that need it most.

“Whenever you change a system there are always issues, people get used to a system and rightly they rely on it. But sometimes we have to have all three systems to meet growing and changing needs, and that is I think what the UK Government is trying to do.

“Have we been faultless? No, absolutely not – it is very clear and I know of the letter that the questioner was speaking about the roll-out of Universal Credit, and some of my Conservative colleagues have asked for that to be delayed.

“I met with David Gauke a couple of weeks ago and raised a number of these issues with him. There are concerns particularly around the technology used, the computer systems etc.

“Some of the biggest supporters of Universal Credit are those who work with people who need benefits day in and day out. They can actually see that there is great benefit in getting people off the system and more used to how you would get an income when you were back at work.

“So there are positives to the system but there are still problems that we need to iron out as well.”

Wave Newsbeat with insideMORAY is a weekly show broadcast via Wave Radio, Moray’s Hospital and Community Radio station at Dr Gray’s. The show goes out at 6pm each Friday – for details on how to listen or to listen to previous shows visit http://waveradio.org.uk/