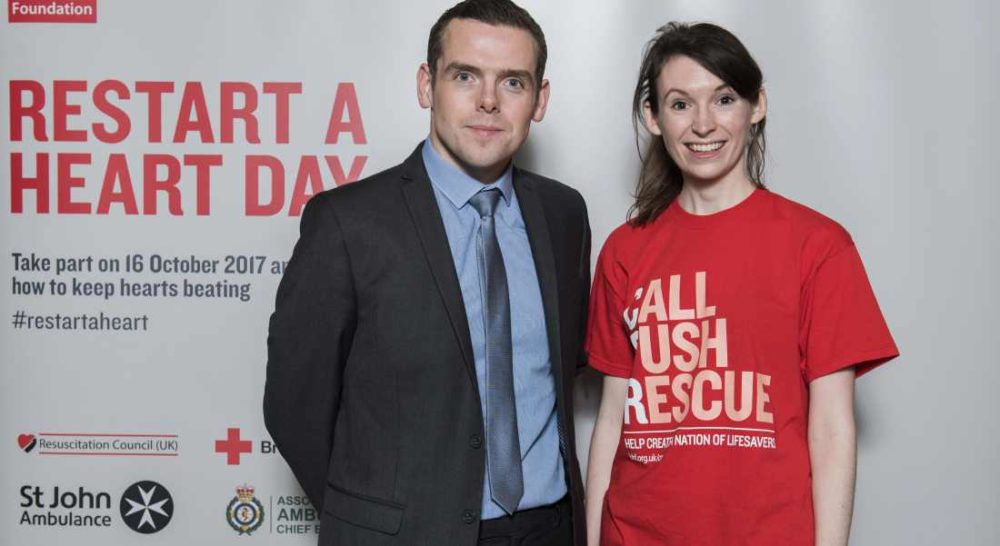 DOUGLAS ROSS IS URGING more people to learn how to use CPR – noting the warning issued by the British Heart Foundation that those who are not trained in the procedure are less likely to perform the life-saving skill.

The Moray MP recently met with representatives from the British Heart Foundation, St John Ambulance and the British Red Cross at a ‘Restart a Heart Day’ at Westminster.

Douglas said: “This has been a very informative session and I’d encourage more people to learn these vital first aid skills which could save a life.

“It is worrying to hear the number of lives being lost because rates of bystander CPR in the UK are so low. Every second counts, and CPR really could be the difference between life and death and as I have seen myself, it is nothing to be scared of and is an easy skill to learn.

Simon Gillespie, Chief Executive of the British Heart Foundation welcomed the fact that Douglas attended the drop-in event. He said: “It’s great to have his support.

“The chance of surviving is almost zero if people collapse and receive no bystander CPR until the emergency services arrive. So, there is clearly a huge benefit to the public knowing these life-saving skills which is evidenced by the vastly better survival rates from cardiac arrests in countries where CPR is part of the curriculum.

“Thousands of deaths could be prevented if more people learned how to do it.”

People wishing to find out more about CPR can contact the British Red Cross or the British Heart Foundation.