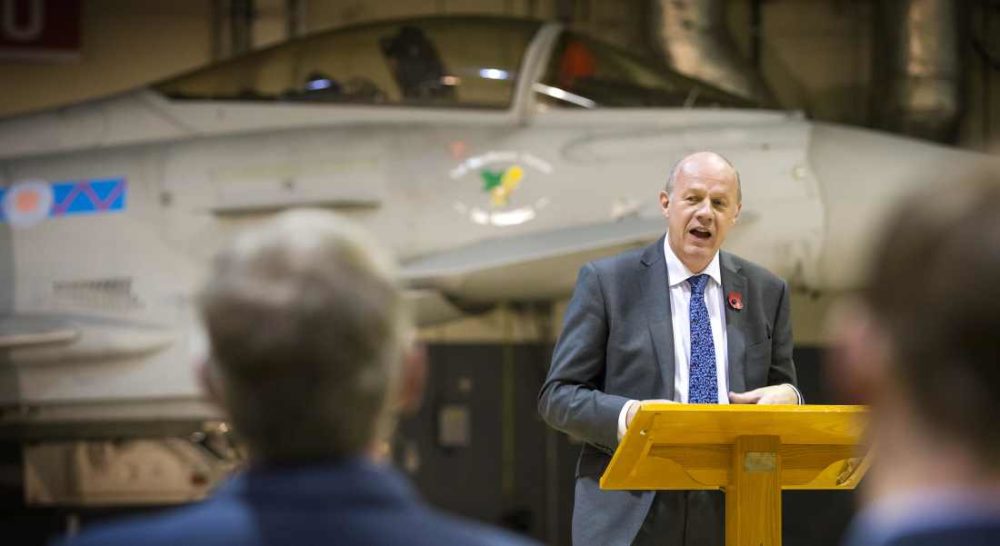 A LONG-STANDING TRADITION has been upheld at RAF Lossiemouth this week when the First Secretary of State unveiled a Typhoon that has been renamed ‘Sir Roderic’.

The ceremony is in honour of the RAF tradition born of one family’s tragedy in 1941. That year, Lady MacRobert lost two sons who were lost when on operations with the RAF within six weeks of each other.

Roderic (25) was killed when leading a Hurricane aircraft attack on German positions in Iraq, while Ian (24) was declared missing in action after his Blenheim aircraft failed to return from a search and rescue mission flown from Shetland – his body was never found.

Their older brother Alasdair had also been killed in a civil aviation accident in 1938. The indomitable response of Lady MacRobert to these tragedies was to buy a £25,000 Stirling bomber aircraft for the RAF that same year, stipulating that it be called MacRobert’s Reply – it flew 12 operational missions.

In 1942, Lady MacRobert donated a further £20,000 to purchase four Hurricane fighters, which were sent to RAF operations in the Middle East, with three named after her sons and the fourth after her.

A succession of RAF aircraft has carried the MacRobert’s name ever since. The MacRobert Trust has donated millions of pounds to charitable organisations, created a variety of prizes, awards, traineeships and endowments, and paid for building works across the country. At the ceremony at RAF Lossiemouth yesterday Damian Green MP said: “In this season of remembrance, the MacRobert’s legacy epitomises the contribution made by Scotland and the Scots to the defence and national security of the United Kingdom, both historically and today.

“The new Sir Roderic belongs to 6 Squadron which maintains the Quick Reaction Alert (Interceptor) mission, alongside sister aircraft from RAF Coningsby in Lincolnshire. Together they protect UK airspace from rogue aircraft and other threats by providing crews and aircraft at high states of readiness 24 hours a day, 365 days a year.”

Chris Hockley, Chief Executive, MacRobert Trust added: “It is fantastic that 6 Squadron are taking on the mantle as our affiliated Squadron, strengthening the bond that we are lucky enough to have with the RAF and RAF Lossiemouth.

“We look forward with huge enthusiasm to getting to know the new members of the MacRobert ‘family’ – the men and women of 6 Squadron and to seeing Sir Roderic in the skies above Douneside.”

RAF Lossiemouth is home to 5 Force Protection Wing, which has deployed regularly to deliver Airfield Force Protection Training to Nigerian Forces. Moray-based personnel and aircraft have also deployed on training and defence engagement activity in Oman and the Far East over the past year. From 2020, RAF Lossiemouth will begin to be the home of the new £3bn fleet of Poseidon P-8A Maritime Patrol Aircraft, which will add to the UK’s surveillance capabilities and are designed to conduct anti-submarine and anti-surface warfare, search and rescue and intelligence gathering. They can carry torpedoes and anti-shipping missiles and will be used to protect the two new UK aircraft carriers and the nuclear deterrent.

Poseidon will increase the Lossiemouth workforce to over 2,000 personnel bringing wider economic benefits, with £400m being invested in new support infrastructure for the nine Poseidon aircraft. Full Operating Capability is expected by 2024, and will include nine aircraft and 18 crews.

As a leading member of NATO, the UK Ministry of Defence has already signed agreements with the US and Norwegian militaries to cooperate closely on operating their P-8A aircraft across the North Atlantic.

The previous MacRobert’s Reply aircraft was a Tornado GR4 operating from the Moray base with XV(Reserve) Squadron until its disbandment in March this year. The Tornado will, however, remain at the base as ‘gate guardian’.