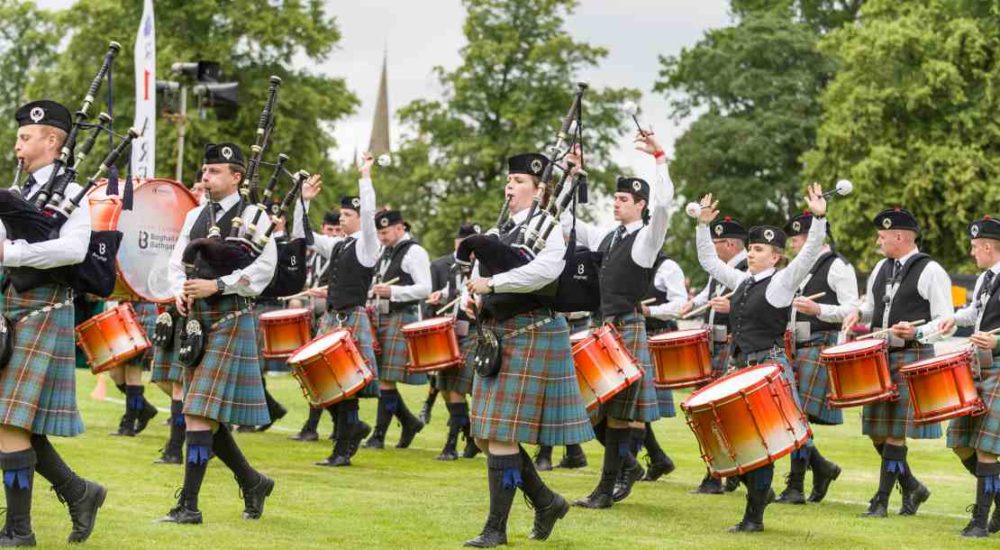 BUSINESSES THROUGHOUT MORAY are being encouraged to ‘bang the drum’ for their respective firms – by getting involved in the final fling for Piping At Forres.

The European Pipe Band Championships will take place for the last time on June 30 after a six year run, and organisers of the event want to make sure it is bigger and better than ever before.

In January, Forres Events Limited will host an event at the distillery of title sponsor Benromach Speyside Single Malt Scotch Whisky. The party will welcome back previous sponsors, but the organisers are hoping that it will also entice potential new investors to get involved with the last Piping At Forres.

Joanna Taylor, a director of Forres Events Limited said the sponsors event will showcase why investing in the one day celebration makes good business sense:

She added: “This is the last Piping At Forres and is the last opportunity that businesses will have to become part of its legacy. The event attracts people from all over the world.

“Grant Park, such an important part of the recent triumph of Forres in Britain in Bloom, will be filled with thousands of pipers and drummers along with many thousands more spectators. What better place to showcase your business?”

She added: “There are many ways to get involved with the event. Our sponsorship packages are designed to be attractive to a range of businesses and budgets.

“Packages can include opportunities to be involved in advertising of and at the event, retailing your products in one of the two “villages” set up within Grant Park and entertaining current or potential customers or staff in our Chieftain’s marquee. The investment does not need to be huge and individual, personal sponsors are also welcome.”

The event has been supported by title sponsor Benromach Speyside Single Malt Scotch Whisky since it began in 2013.

Marketing director Ian Chapman said it has been a great platform for the brand: “It was a very strong event from the start. Those who have attended it have been very impressed with the infrastructure and the layout in the park and its location within the town and I think that contributes to the success of the event.”

He added that for Benromach, supporting Piping At Forres has only been a positive experience and one Ian would recommend to other businesses: “We are very proud of our association with the event because it promotes the local community, but it is also an opportunity to raise brand awareness.

“The event is helping raise general awareness of the brand within that type of audience. For any company that wants to be involved with the high-quality event, that’s the real attraction that’s one of the reasons we got involved.”

If you are keen to find out more about becoming a sponsor at Piping At Forres or attending the event at Benromach in Forres on January 18th email Joanna at joannat@pipingatforres.com