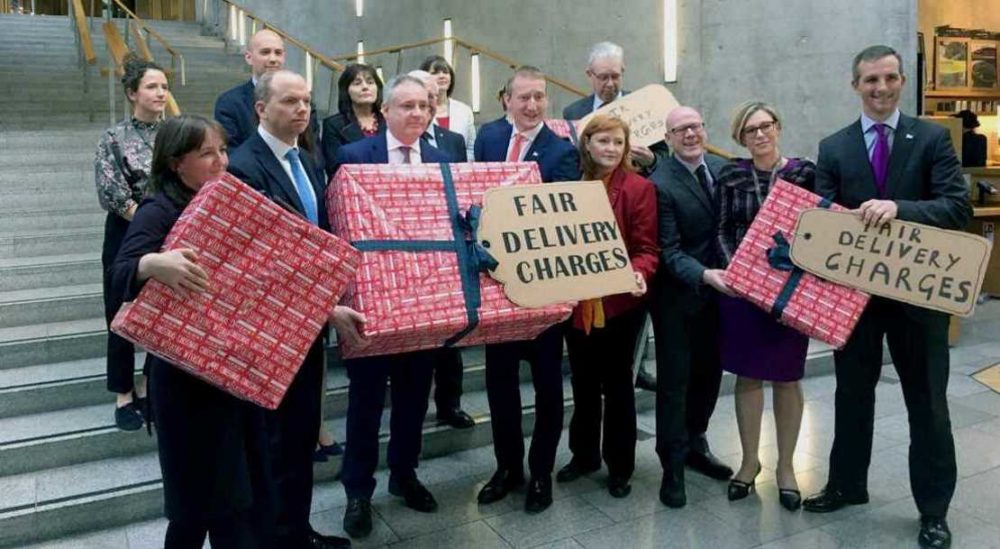 FAMILIES IN MORAY and throughout Scotland were being clobbered in the build-up to Christmas by discriminatory delivery charges – with Moray’s MSP revealing that in Moray, charges were £250 higher for the same gifts when compared to those living in Surrey.

Mr Lochhead has been campaigning to end the delivery charge unfairness for a number of months – and recently launched a website allowing people to share their horror stories of extortionate delivery charges.

Research by the campaigning MSP has shown that unfair charges could leave families in Scotland significantly out of pocket on orders for an average order of Christmas gifts, including:

And a bottle of Macallan whisky from drinksupermarket.com, produced in Moray, costs £4.95 to be shipped to Surrey, but £14.95 to Moray.

Commenting, SNP MSP Richard Lochhead said: “The ridiculous discrimination that people across Scotland are facing on delivery charges is at its clearest during the festive period. These absolutely staggering examples prove exactly that.

“The Christmas Tax that people in Scotland are being forced to pay is hitting families in the pocket – and it can quickly add up to hundreds of pounds difference between people in different parts of the UK. Many retailers deliver free or for a modest charge to Northern postcodes – but others charge eye watering surcharges which this research shows.

“How can it possibly be right for a family in Moray to have to pay £250 more in delivery charges on their Christmas presents than a family in Surrey, just because they live in Elgin rather than Epsom?

“We need action on this issue – with more people set to be ripped-off in the January sales, and indeed whenever they want to order from certain websites. It’s simply not tenable for companies to continue with this discrimination which should be illegal.

“The UK government must take action on this issue – people across Scotland must be treated equally.”