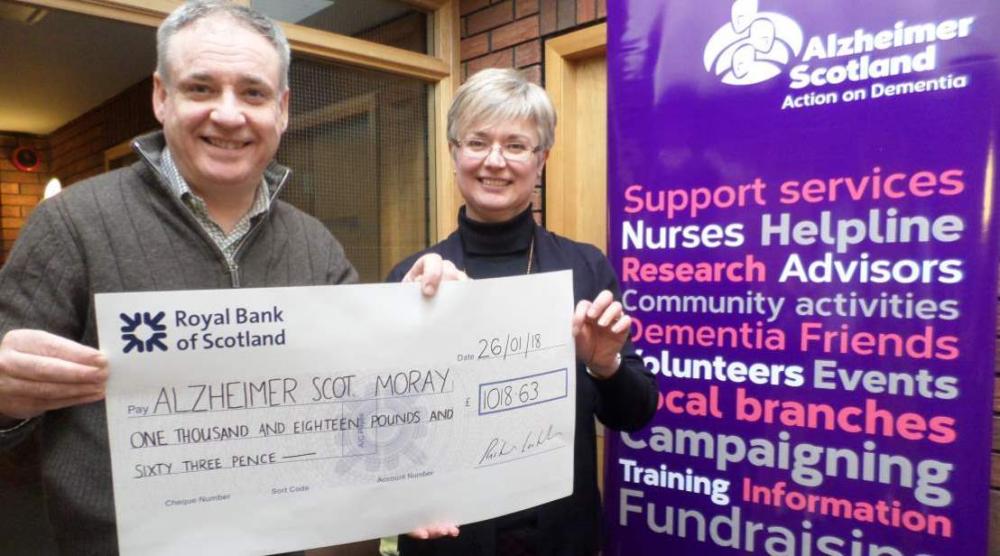 THE MORAY BRANCH of Alzheimer Scotland picked up a cheque for over £1000 on Friday – thanks to local business sponsorship for Richard Lochhead MSP’s Christmas Card.

The Moray MSP received the back of Springfield Properties, Walkers, Forsyths, Baxters, Greers, Spay and Robertson for his annual card, which was designed by Applegrove Primary pupil Lewis Mackenzie.

Alzheimer Scotland is Scotland’s leading dementia organisation – and the team in Moray work hard to provide support to people with dementia and those who care for them, as well as campaigning to improve policy, and offering training for their Dementia Friend Scotland programme.

Mr Lochhead, who completed his Dementia Friend training in 2016, said: “I would like to thank the generous local businesses who sponsored my Christmas card this year and helped raise such a substantial donation to Alzheimer Scotland Moray.

“The theme of this year’s competition was family and friends, which is very appropriate given the help and support that Alzheimer Scotland provide to people living with dementia and their families, ensuring that no one in Moray faces dementia alone.

“The work of Alzheimer Scotland Moray is invaluable to many families in our local communities and I’m pleased to have been able to offer some support to their efforts through my annual charity Christmas card.

Campbell Mair, Head of Operations from Alzheimer Scotland, said: “I would like to thank Richard Lochhead for recognising Alzheimer Scotland’s work across Moray by choosing the charity as the main beneficiary from his Christmas Card campaign.

“All monies raised will go a long way to boost our vital services across Moray including our local support, services and advice and will help us get closer to achieving our aim – making sure that nobody faces dementia alone.

“With the support of generous fundraisers we can continue to safeguard vital services including our 24-hour Freephone National Dementia Helpline, Dementia Advisors, Dementia Resource Centres across the country as well as our commitment to funding our research centres at the University of Edinburgh and the University of the West of Scotland.”