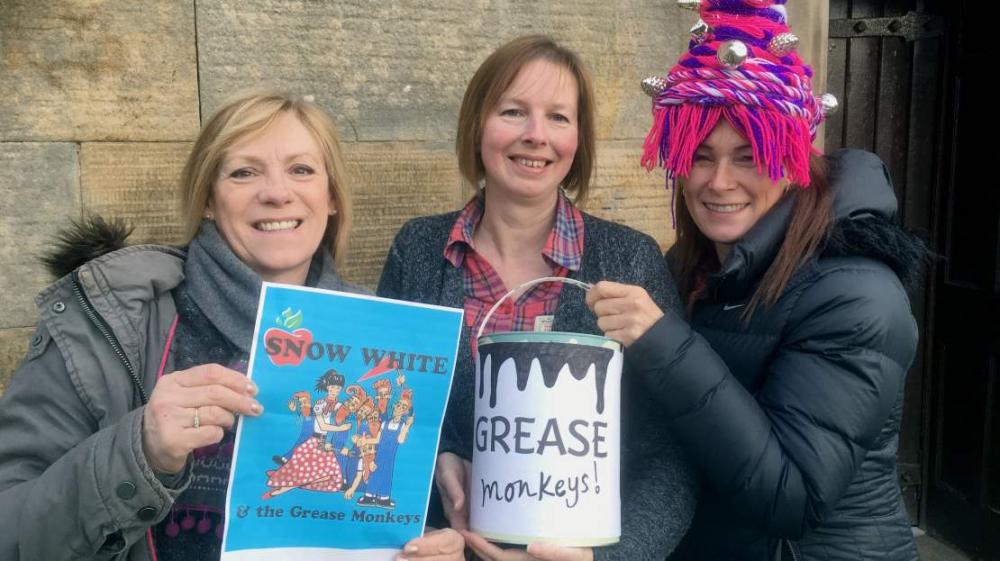 A CLASSIC FAIRYTALE meets Grease is the description being placed on a unique community pantomime being held to boost funds for a village hall.

Volunteers from Dyke and its surrounding areas are working to put Snow White and the Grease Monkeys on in the church hall – raising funding for a building that has largely been untouched since the 1950’s.

The hall refurbishment will form Phase 2 of the Dyke Access Project, which aims to make the church and its hall welcoming, with user friendly access and improved modern facilities.
Church elder Alison Rodgers, who is helping to co-ordinate the team working on the panto and is on the committee for the Access Project, said she had been overwhelmed by the response from the community.

She said: “A pantomime was staged in Dyke about nine years ago to raise funds for Dyke Primary School and it was a lot of fun and a great success so we have decided to do it all again. We put a call out for people to volunteer and the response has been phenomenal.

“Whilst this is a relatively small community, staging a pantomime is no easy feat and as well as cast we needed people to work on scenery, hospitality, publicity, sound and lighting and costumes. Most of the roles have now been filled with so many people saying they are happy to pull their weight with any task. It’s very reassuring to know there are so many people invested in their community.

”We had so many people, quite a few who are not involved in the church who want to get involved as they appreciate the importance of the Access Project and can see that refurbishing the hall will not just benefit the church but will be a great community asset as well.”

The total cost of the Dyke Access Project is estimated to cost around £160,000. Phase 1 of the project involved creating a new path, suitable for wheelchairs from Dyke & District Hall car park to the church and was completed last November.

Phase 2 will see the installation of new toilets including disabled facilities, expanding the hall, improving kitchen facilities and removing asbestos.

Ann Crossman, who has lived in Dyke all her life and is a church elder said: “The hall could be so much better and could be a real asset to the community. Whilst it is situated within the church grounds, we cannot stress enough that this hall will be able to be used by the whole community.”

Snow White and the Grease Monkeys has been penned by another local resident, Linda Walker, who said: “I wrote the pantomime a wee while ago and after some discussion and a few tweaks here are there, we have decided that it will be ideal to help raise money for the Access Project.

“It is just really good fun as all pantomimes are and we urge people to come along. The general story is of Snow White, but it will be complemented with the soundtrack from Grease so there will be a real 1950s theme and of course both stories are familiar to most people.”

Snow White and the Grease Monkeys will be staged in Dyke & District Hall on March 24 at 7pm. All tickets include refreshment during the interval will cost Adults £8, Children £4, Group Ticket (2 adults 2 children) £22.00.