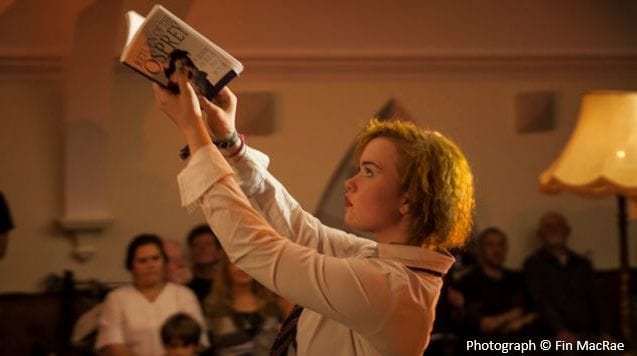 Forres based arts organisation Findhorn Bay Arts is calling for community cast members to be part of a new outdoor theatre production.  People aged sixteen years and over with an interest in acting, movement or music making can be part of the promenade performance alongside a professional cast of actor-musicians.

The theatre piece, called The Buke of the Howlat, is a new production for Moray which will world premiere in the grounds of Brodie Castle during the 3rd Findhorn Bay Festival being held from Wednesday 26 September to Monday 1 October.

Supported by the Year of Young People 2018 Event Fund, Creative Scotland’s Open Fund and a number of local business sponsors, The Buke of the Howlat will bring to life the story from the 15th Century epic Old Scots poem written by Richard Holland and transform it into a vibrant modern-day visual theatre spectacle.

Producer Kresanna Aigner said “We are looking for volunteer community participants to be birds, aristocrats, soldiers and music makers to form a cast of over 300 people in this stunning outdoor show.

You will learn your role and new skills at rehearsals throughout August and September before performing in the show during the award-winning Findhorn Bay Festival.”

A Community Casting day for interested participants will take place today, Saturday 26 May, 2-5pm in the Masonic Hall in Forres.  The afternoon will include drama and movement workshops, and musicians who play fiddle, acoustic guitar, brass and woodwind are encouraged to take their instruments along and play.

Kresanna added, “This is a unique opportunity to be part of a professional production, to develop your creative talents and to become immersed in this Old Scots tale as part of the Findhorn Bay Festival”.

To register to attend the Community Casting day email info@findhornbayarts.com or call 01309 673137