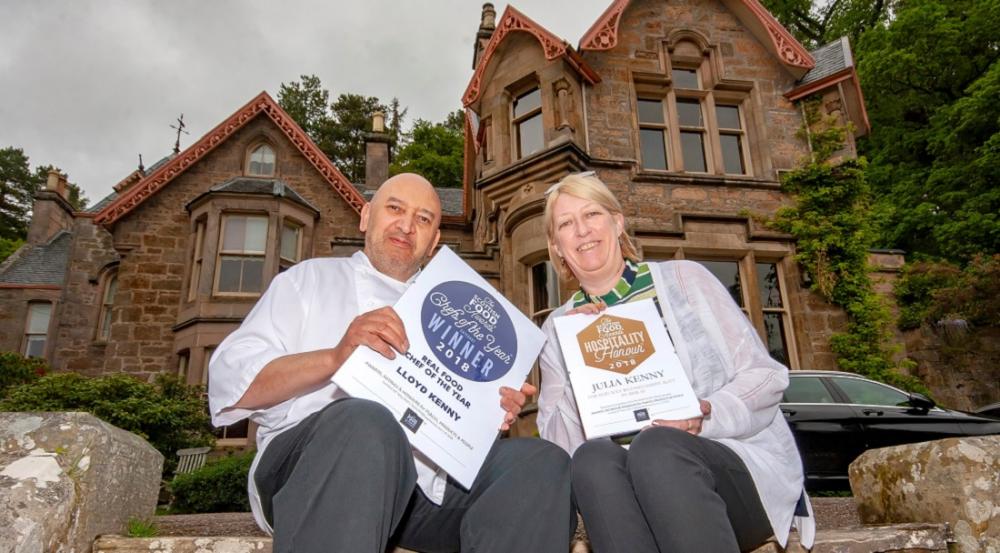 A Moray restaurant best known for its real food and hospitality has been served up a double helping of awards for what it does best.

Cluny Bank in Forres added two more accolades to a long list following the Scottish Food Awards in Edinburgh at the weekend. It is the second year, they have celebrated a double win at the same event.

Owners Lloyd and Julia Kenny each collected their awards at a glittering ceremony on last Sunday for their achievements in the kitchen and front-of-house.

The husband-and-wife team manage the hotel between them and rarely take a day off.

At the ceremony, Lloyd became Real Food Chef of the Year, while Julia picked up a separate award for her services to Food Hospitality in Moray. Last year, they picked up the Small Hotel Food and Drink Award and the Real Food Gold Medal.

Lloyd said, “Cooking with real food is our passion and always has been. As time goes by, the recognition we are getting for this is some sort of proof we are getting it right.”

Cluny Bank, which became a restaurant with rooms in 2013 is no stranger to awards, the restaurant already is one of only two in Moray to have an AA rosette. It also has the AA Gold award, two awards from the Scottish Hotel Awards, and is in the TripAdvisor Hall of Fame for being the number one hotel in Moray for five years in a row.

Over the years, the hotel has seen previous recognition from the Grampian Food Awards, Scottish Hotel Awards and the Scottish Food Awards, for which they believe the use of local produce has contributed.

Julia added, “We became a Restaurant with Rooms in 2013 to show our focus on food. However, the hospitality aspect is equally important to us, and it’s nice to have something to hang next to Lloyd’s awards.”

Lloyd and Julia bought the Cluny Bank Hotel in 2006, and have made improvements every year, including completely refurbishing all the bedrooms, restaurant and bar.

Julia added “It’s hard work running a place like this all year round. Making a difference with real food and hospitality is what we strive for day in, day out, and so these awards are a true reward for us. Getting these together on the same night is our just deserts.”