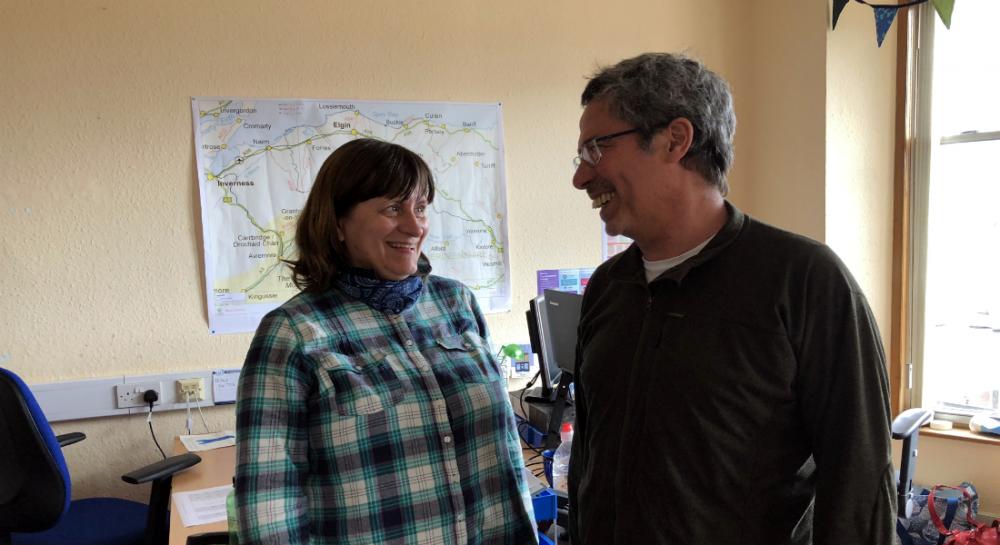 The new editorial and publishing team at InsideMORAY is “rolling up its sleeves and preparing to take the plunge,” says new (interim!) editor Fabio Villani.

After the long pause which followed the retirement of founding editor, publisher and chief bottle-washer Stuart Crowther, the new team is preparing to start publishing news stories on InsideMORAY from this week.

“I’m not exactly a shrinking violet,” says Fabio, “and I have faced my fair share of challenges over the years: from chairing ‘lively’ public meetings to trying to reason (in Spanish) with five machete-wielding Columbian youths (long-story, remind me to tell you all about it one day). But the idea of following in Stuart’s footsteps is daunting to say the least!”

“Over the last few years, InsideMORAY has built an enviable and well-deserved reputation as a shining example of community journalism. Reading the latest news, often accompanied by Stuart’s incisive analysis, became a ritual for many Moray loons and quines, native or adopted, at home or abroad. A discerning audience which has been waiting – patiently or otherwise – for someone to step forward and write the next chapter of the InsideMORAY story; I hope they will be kind and forgiving!”

Fabio’s day-job is to run local charity tsiMORAY, which promotes participation in the public life of Moray and has agreed to take on the responsibility of running InsideMORAY. Fabio will act as the interim editor on a voluntary basis until tsiMORAY can secure the funds to recruit a skilled editor to take on the role and return InsideMORAY to the levels of activity it achieved under Stuart’s leadership.

Fabio already volunteers on a number of community groups, including Forres Area Community Trust (FACT) and Transition Town Forres (TTF), and is involved in a campaign asking for greater community involvement in the dualling of the A96. As a consequence, he will only commit to publishing one story a day to start with, although he will try to do more if he can. So readers can expect at least one news story every working day only, starting from Tuesday, 8 May.

The key member of the team working her techno-magic to actually publish the stories will be Kasha Jarosz, who also works at tsiMORAY and is herself an InsideMORAY fan.

“When I moved from Orkney to Moray two years ago, InsideMORAY quickly became an invaluable source of local news and helped me to immerse myself in the local community,” says Kasha. “There is no way one person could fill Stuart’s formidable shoes; we’re likely to need a whole team of volunteers! I am one of those brave (crazy?) souls willing to have a go, and will take care of the technical side of InsideMORAY. I can’t promise that I won’t make mistakes, but I can promise that I will try to remedy them as soon as possible.”

In the fullness of time, a small group of volunteers led by Karen Cox, will also help administer the InsideMORAY Facebook group. We are keen to use Facebook to enable readers and followers to add their comments and insights to stories, and will publish guidance to help ensure all discussions, however lively and passionate, are carried out in a respectful way.

Let us know what you think, what you like and don’t like, and please keep sending your stories to editor@insidemoray.com; we may not always be able to publish them, but we will do what we can, when we can!