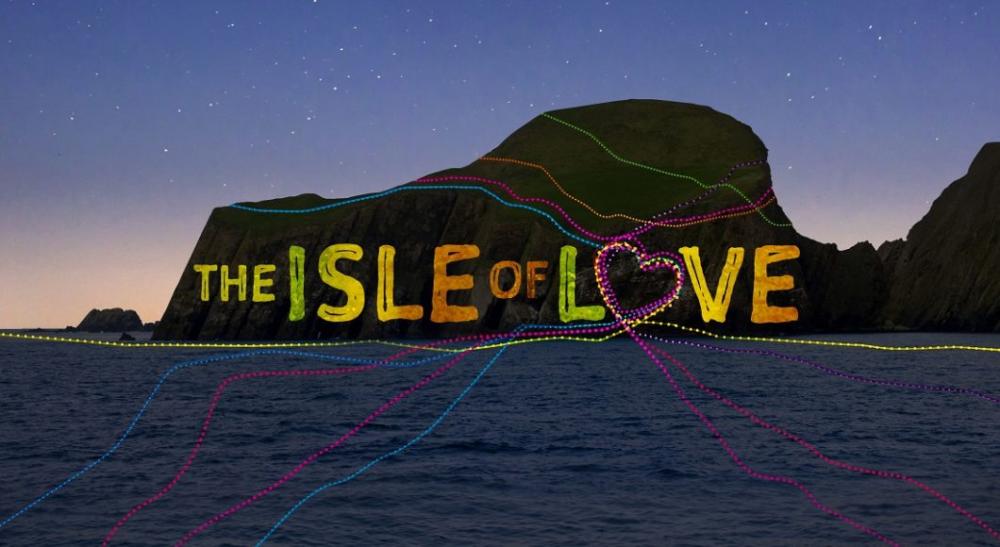 Come on a bittersweet musical journey exploring the beauty and healing qualities of island life, addressing the reasons people choose to visit, to remain, to depart and to return.  Featuring the quirky lyrical genius of Adam Ross from indie-pop band Randolph’s Leap and with laughter, tears and great live music, you’ll fall in love with The Isle of Love!

So reads the strapline to the brand new “play with music” which opened to great acclaim at Eden Court in Inverness last weekend.  In advance of the Moray leg of The Isle of Love tour, Euan Martin, co-writer and producer of the show from Alves-based theatre company Right Lines Productions reflects on the origins of the project.

“Inspiration comes from all sorts of places,” Euan explained. “I was driving home from work late one night and caught the end of an interview on BBC Radio Scotland’s Tom Morton Show. The featured band was Randolph’s Leap and Adam Ross, who is originally from Nairn, was promoting his album Clumsy Knot. I was intrigued by the song “Isle of Love” and identified with the quirky, humorous lyrics. Its promise of a “paradise by the North Atlantic” offering the chance to “get away from the noise and chatter and reconnect with the things that matter” had me drawn in immediately!

A trawl through the band’s back catalogue revealed a treasure trove of great songs and the idea for a theatre show began to form. When my colleague Dave Smith and I approached Adam, he was initially wary of the out of the blue contact and a bit surprised by our suggestion that we could weave a tale around a selection of his songs.  However, after a quick internet search, he found that Right Lines had a decent track record of popular and successful work and he totally engaged with the project. Three years on, The Isle of Love is about to embark on a 4 week Scottish tour!”

The Isle of Love will be performed by a versatile, six-strong cast, including Adam Ross and will feature live music throughout.  The show will be directed by Mark Saunders, former Head of the MA Classical and Contemporary Text postgraduate degree at the Royal Conservatoire of Scotland who has directed several Right Lines shows over the years.

Euan continued, “All the characters are on their own personal journeys. The island is a constant, but it is also a catalyst assisting each character to confront their circumstances and arrive at a better place. At a time when mental health issues are very much in sharp focus, one of the themes of the show is the positive impact of people and place when folk are dealing with the stress and strain of everyday life.”

The show features existing material and no new songs have written specially for the piece.  The format is one of quick changes and short scenes providing little snapshots of the characters’ lives interspersed with Adam’s wonderful songs, which reflect the feelings of the characters and their various situations.

“The lyrics have hardly been changed at all – the songs have only been slightly rearranged to suit the musical skills of the various performers. The songs are a reflection of the characters’ emotions and add tone and mood rather than directly progress the storyline as you might find in a more traditional musical.”

The Isle of Love arrives in Fochabers on Tuesday 22nd May, Aberlour on Wednesday 23rd, along the coast to Portsoy on Thursday 24th and then Rafford on Friday 25th. However, the Rafford date has been completely sold out for six weeks!  People are strongly advised NOT to take a chance on trying to get in, as they will be disappointed. There is absolutely no space left. Folk should book for the other local dates, which includes the final night of the tour at Universal Hall, Findhorn on Saturday 16th June.  Full dates and details are available at www.rightlines.net