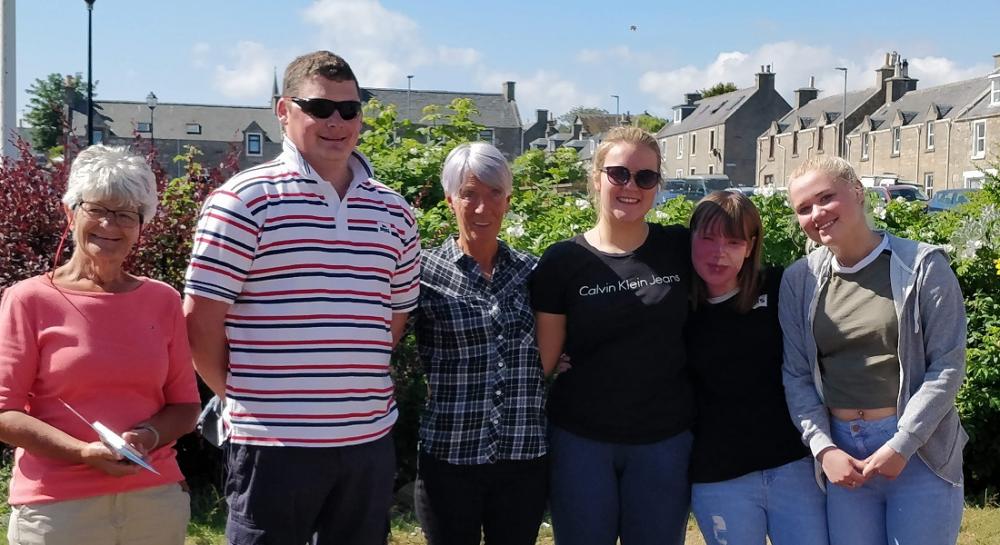 A dozen local good causes were given a boost as supporters took part in a charity abseil off Grampian Furnishers in Lossiemouth.

Local outdoor learning and adventure charity, Outfit Moray, organised the abseil event with the aim of supporting other local good causes. Their Community and Corporate Fundraiser, Karen Cox explains: “When we issued our emergency fundraising appeal last November, we were blown away by the support we received from the local community.

“As a way of saying thank you, we wanted to arrange something that would not only raise funds for us but would also help benefit the local community in some way. We were extremely grateful when Grampian Furnishers owner, Royce Clark once again offered us the use of his building for another abseil.”

Karen goes on to say, “Fundraising is becoming more and more difficult for smaller, local charities. With little or no budget for fundraising, most cannot afford to pay the entry fees of some of the bigger high-profile events, so often struggle to find different events to entice their supporters. Being able to offer a local and affordable challenge event was something we were thrilled to be able to do and were happy to offer all fundraisers a reduced entry, to encourage as many as possible to enter.”

Onlookers and supporters gathered in Lossiemouth’s James Square to watch the brave abseilers conquer their fears and first to abseil were those fundraising for Outfit Moray. Grampian Furnishers owner and MFR Cash For Kids Board member, Royce Clark, also took part, abseiling down his own building dressed as Batman, much to the delight of the crowd of onlookers below. Later Royce said: “It was a great event and I was delighted to be able to give over our building not only to Outfit Moray, but all the other local charities and groups that also benefitted.”

Amongst those taking part was a nervous and emotional Melinda McLean, who was met at the bottom by a large group of well-wishers and supporters, having raised an incredible £930 for Clan Scotland. Melinda recalls, “After the initial fear of going over the edge, I really enjoyed it.”

Cameron Mackintosh of Logan’s Fund commented, “We were delighted to team up with Abbie’s Sparkle Foundation to enter a team of seven for the abseil. Many of the team had to overcome a really strong fear of heights to take part and did so with great bravery. We have raised a total of £453.75 to be divided between our two charities.”

As well as being able to help several local good causes, Outfit Moray were also able to raise over £1,200 towards their own work with vulnerable and disadvantaged young people across Moray.

Anyone interested in a fundraising abseil who would like Outfit Moray’s support to run one can get in touch via info@outfitmoray.com