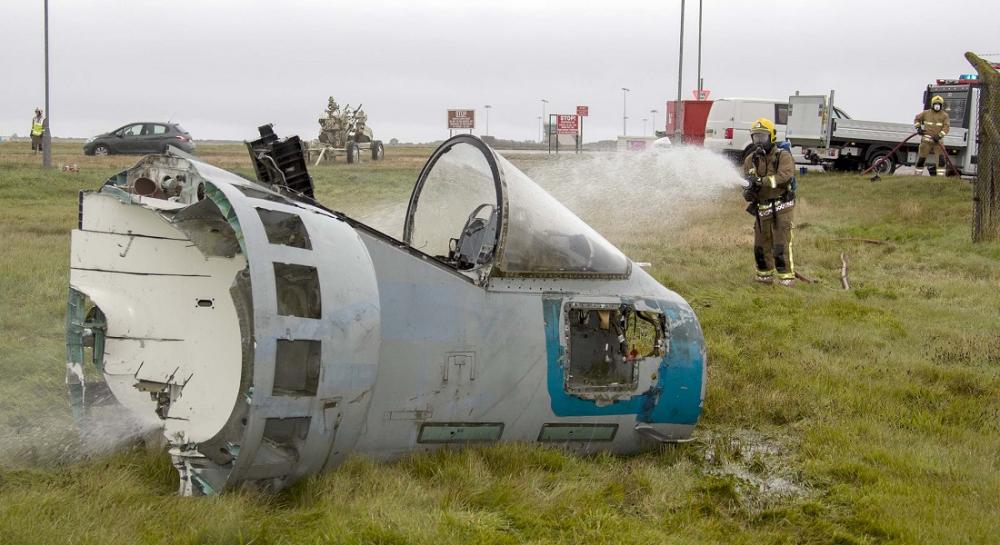 As reported on insideMORAY, a major incident exercise took place at RAF Lossiemouth on Tuesday, 18 September.  The exercise tested the Station’s response and procedures following a simulated aircraft crash.

The annual test of RAF Lossiemouth’s response to a major accident within its perimeter involved local emergency services as well as RAF assets.  Vehicles and personnel from civilian emergency services, including Police Scotland, Scottish Environmental Protection Agency, Scottish Fire And Rescue, the Maritime and Coastguard Agency, and the Scottish Ambulance Service were part of the exercise, using it to assure their own procedures and interaction with RAF Lossiemouth.

Also participating were the combined RAF/RN Joint Aircraft Recovery And Transportation Squadron (JARTS) who were able to create a realistic crash site for the exercise, as well as be on hand to carry out their own jobs in the exercise .  Based at MoD Boscombe Down, JARTS are a dedicated aircraft post-crash management (APCM), recovery, and transportation unit.  The Squadron holds four teams at high readiness to deploy worldwide to respond to military APCM incidents for all three Services.

Officer Commanding Operations Wing at RAF Lossiemouth, Wing Commander Matt Hoare, who oversaw the multi-agency exercise, said: “Today’s exercise has been an opportunity to test and evaluate our response to a major incident at RAF Lossiemouth.

“Any major incident requires the co-ordination of multiple activities both at the incident site and in the command centre.  Being able to do this exercise with the civilian emergency services has made it as realistic as possible, and we will capture the lessons from it.”