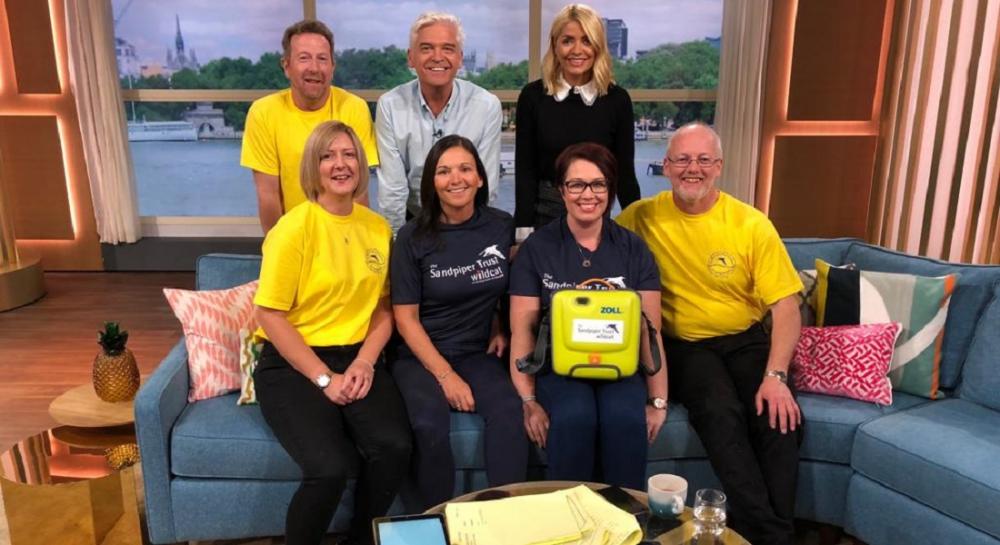 Five North-East volunteers passed on vital life-saving skills last week to ITV’s This Morning presenters. Lorna Donaldson (Inverurie), Shona Gray (Udny), Lindsay Smith (Elgin), Keith Millar (Oldmeldrum) and Ian Hendry (Turriff), who are members of the Sandpiper Wildcat Project, were invited to appear on the show on Mon 10th Sept to perform CPR (Cardiopulmonary Resuscitation) with Phillip Schofield, Holly Willoughby and Dr Ranj to the tune of the viral children’s song “Baby Shark”.  The group were contacted by ITV after previously filming a CPR demonstration for members of the public at Dean’s of Huntly to the beat of the popular song, which has a rhythm that matches the rate at which chest compressions should be performed in the event of a cardiac arrest. Their appearance on the show aimed to raise awareness of CPR, how to perform it correctly and reduce any fears the public may have about carrying out CPR.

Sandpiper Wildcat facilitator Lorna Donaldson said “it is important for people to learn more about how to conduct CPR, even if it is because of an annoying song! It was a great opportunity for us to raise awareness of the Sandpiper Trust and the Wildcat Project, which aims to improve survival rates in Grampian for people suffering an out-of-hospital cardiac arrest. For every minute someone in cardiac arrest is left without intervention their chance of survival decreases by 10 per cent.”

Lindsay Smith, a radiographer at Dr Gray’s Hospital, appeared on the show as one of the volunteer cardiac arrest responder.  She said her time at the ITV Studios was “just the most fantastic experience. Everyone was so lovely and looked after us really well. Being on national TV really helped us get the Wildcat message across that anyone can do CPR and anyone can save a life. People have commented that the song we used is really irritating and that other songs have been used in the past such as The Bee Gees hit Staying Alive. It’s not really about the song, it’s whatever sticks in your mind to help get the recommended rate of 100-120 beats per minute for chest compressions. The Baby Shark song helps to bridge the gap between young and old to educate as many people as possible.”

The Sandpiper Wildcat project has a network of community volunteers across the North-East of Scotland, who are trained to provide swift medical care in the event of a cardiac arrest. By providing treatment in those crucial early minutes, ahead of the arrivals al of the ambulance service, the community-based Cardiac Responders will make survival more likely.

For more information or to volunteer please contact Lorna Donaldson on lorna@sandpiperwildcat.co.uk.