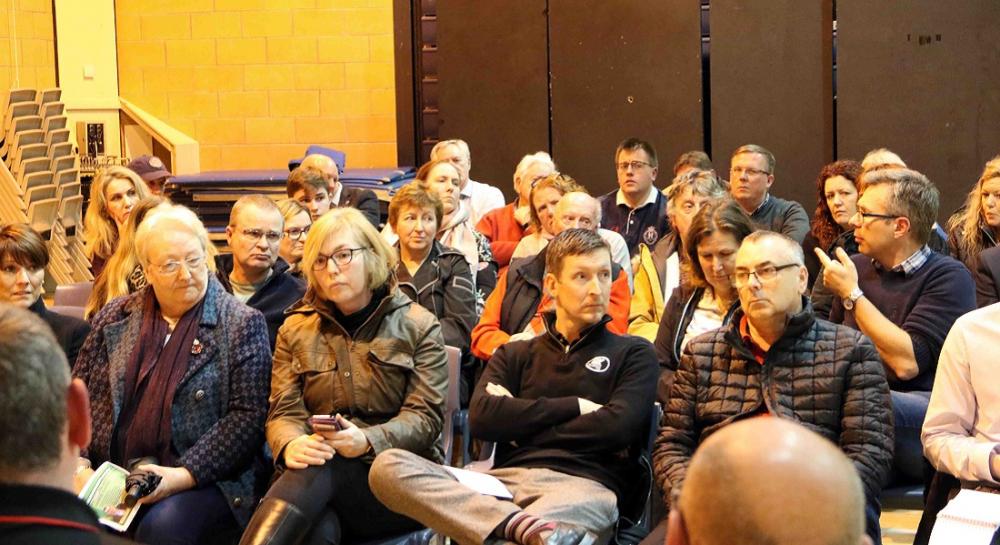 Local politicians are leaving no stone unturned in their bid to stop the closure of Bank of Scotland branches in Keith and Lossiemouth.

In the two weeks since insideMORAY first reported on the planned closures, elected politicians at all levels have been seeking to put pressure on the Bank of Scotland to reverse their decision.

Moray MP Douglas Ross has chaired public meetings in Lossiemouth and Keith. “It was clear from the meeting how much the community is frustrated and annoyed by this latest closure and by the lack of dialogue from the bank over this important issue”, he said after the Lossie meeting.

“However, after I pressed them on their no-show decision, Bank of Scotland representatives have agreed to meet with me and a delegation from both Keith and Lossiemouth whose branches are being axed.

“The meeting will take place next month and will include local councillors and members of the business community.”

Councillor James Allan who represents the Lossiemouth ward added: “This decision will make it even more difficult for visitors and local people to access cash as the Bank of Scotland is also proposing to close its ATM.

“It is ridiculous that a town the size of Lossiemouth stands to be reduced to just two ATMs as a result of this decision. As a community we need to come together and make it clear that this is totally unacceptable.”

In the meantime, Moray MSP Richard Lochhead had discussions with the Bank of Scotland over their closure proposals for the two branches.

The MSP held talks with David Martin (Group Public Affairs for Scotland) where he conveyed the concerns of local communities in Moray affected by the recent announcement by the Lloyds Banking Group. Mr Lochhead secured an agreement from the bank to meet with him and community representatives from Lossiemouth and Keith.

“The plans to close the Bank of Scotland branches in Lossiemouth and Keith are a real blow to the local communities, and there’s particular concerns in Lossiemouth as this is the last remaining bank in the town”, the local MSP said.

“During my talks with the Bank of Scotland I made it clear that there’s real opposition to the closures in Keith and Lossiemouth, and I urged the bank to respond to that strong feeling by reconsidering their plans to close these branches.  The closure of these banks will have a real impact on those who rely on face to face banking, as well as our local businesses who need access to banking services within the local community.

“With regards to Lossiemouth, it is especially difficult to understand why the Bank of Scotland would close the last bank in the town at a time when we’re set to see economic activity and the community grow substantially with the expansion of RAF Lossiemouth.

“Whilst we have an uphill struggle to persuade the bank to reverse this decision, I’m pleased that Lloyds Banking Group have agreed to meet with myself and community representatives from Keith and Lossiemouth in early December, which gives us an opportunity to put forward our strong case for keeping these branches open.”

Richard Lochhead and Councillor Theresa Coull (Keith & Cullen) are also seeking the support from members of the Keith community in a bid to save the town’s Bank of Scotland from closure.

The SNP MSP and Councillor have launched a petition to demonstrate that customers of the bank, and others in the town, want to keep the face-to-face contact provided by the branch.

The petition follows letters sent by both politicians urging Lloyds Banking Group to re-consider their decision to close the Keith branch.

The Moray MSP said: “Councillor Coull and I have launched this petition as a way to put more pressure of the bank to keep the Keith branch open.

“Recent reports have shown that Moray has been one of the area’s most hit by recent closures and this latest announcement further compounds that feeling that banks are deserting Moray.

“I urge as many people as possible to sign this petition and send a clear message that the people of Keith want to keep their bank.”

Councillor Theresa Coull said: “This announcement is a real slap in the face to the Bank of Scotland’s customers and the wider community of Keith.  Many people choose not to use internet banking and need to use the local branch.

“Many vulnerable people and businesses depend on having a local branch and while we are in the fortunate position that we won’t be left without any bank Bank of Scotland customers shouldn’t be put in to the position of having to move banks.

“Keith used to have 5 banks and this announcement will leave us with just 2.  It certainly feels like banks are pulling out of Moray.

“I hope that folk will get behind this petition and make it crystal clear that we want to save our bank.”

Highlands and Islands MSP Jamie Halcro Johnston will today speak out against bank closures in Moray during a Scottish Parliament debate on the latest round of proposals from the Bank of Scotland.

Speaking ahead of the debate, Jamie Halcro Johnston said: “There is a range of evidence that shows the far greater impact of bank closures on people in the Highlands and Islands. We already have further to travel to access services, and the availability of reliable connectivity in the region makes digital banking alternatives less viable.

“Branches are important features of our town centres and support the work of our local businesses.

“The banks should listen to their customers here in Moray and recognise the distinct needs of communities in the Highlands and Islands before making final decisions on the future of branches here.”