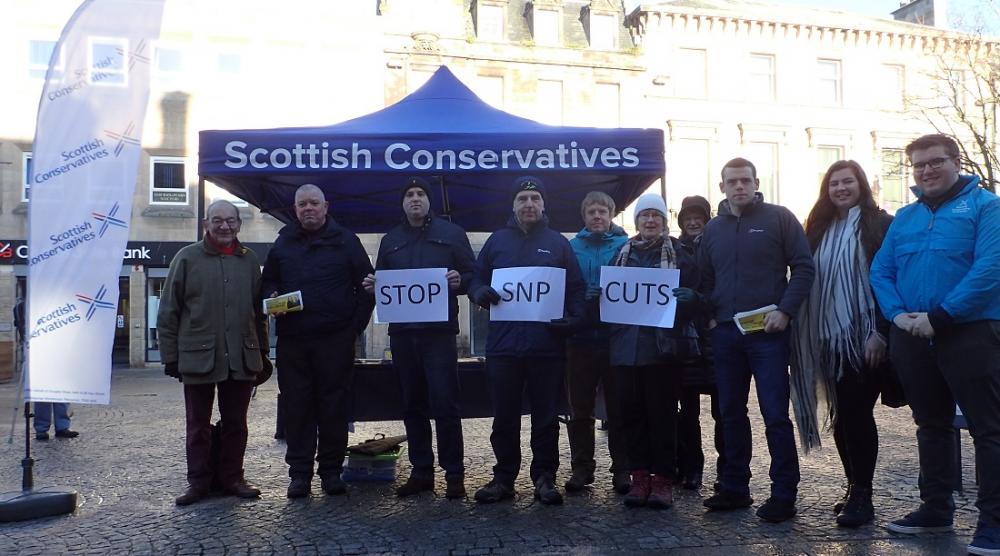 Moray’s three most senior Conservatives have written to First Minister Nicola Sturgeon to ask her to prevent savage cuts to services in Moray.

Their statement states that “they have acted after it became clear that adjustments made to the Scottish Government’s budget could make little difference to the fate of a range of Council services including swimming pools, road gritting, libraries, Active Schools provision and music tuition all of which stand to be decimated under the SNP administration’s current proposals.”

Moray MP Douglas Ross, Jamie Halcro Johnston MSP and Cllr Tim Eagle, Leader of the Conservative Group on Moray Council, have told Ms Sturgeon she should visit Moray to see for herself the damage the cuts are making first-hand.

Mr Ross, who joined Conservative councillors and activists on the Elgin Plainstones on Saturday to protest against the cuts, said: “There is simply no excuse for cuts of these magnitude.  The UK Government has increased the block grant to Holyrood by nearly a billion pounds. The SNP are choosing to spend it in other areas and are ignoring the impact these cuts will have on our communities here in Moray.”

Mr Halcro Johnston said: “Scottish Conservatives will be opposing this damaging budget in the Scottish Parliament, which heaps cuts on an already underfunded Moray Council.

“Moray Council is at financial breaking-point and it is a crisis entirely of the SNP’s own making. That is why I have joined my colleagues in inviting the First Minister to come to Moray to see first-hand the effects these cuts will have on the people most affected. Residents should be in no doubt that the scale of cuts proposed here is unprecedented and will have a huge impact on the delivery of vital public services in the area.

“The people of Moray deserve better than this.”

Cllr Eagle said: “In my letter to the First Minister I stressed that Moray Council needs to be given time to transform the way it delivers its services. The reduction in funding sadly has backed us into a corner which is making this very difficult. The Conservative Group is keen to co-operate with people from all parties or none, but the Scottish Government has to be part of that process. Despite numerous pleas to the Finance Minister Derek Mackay, we have got nowhere. That is why we are going over his head and direct to the First Minister.”