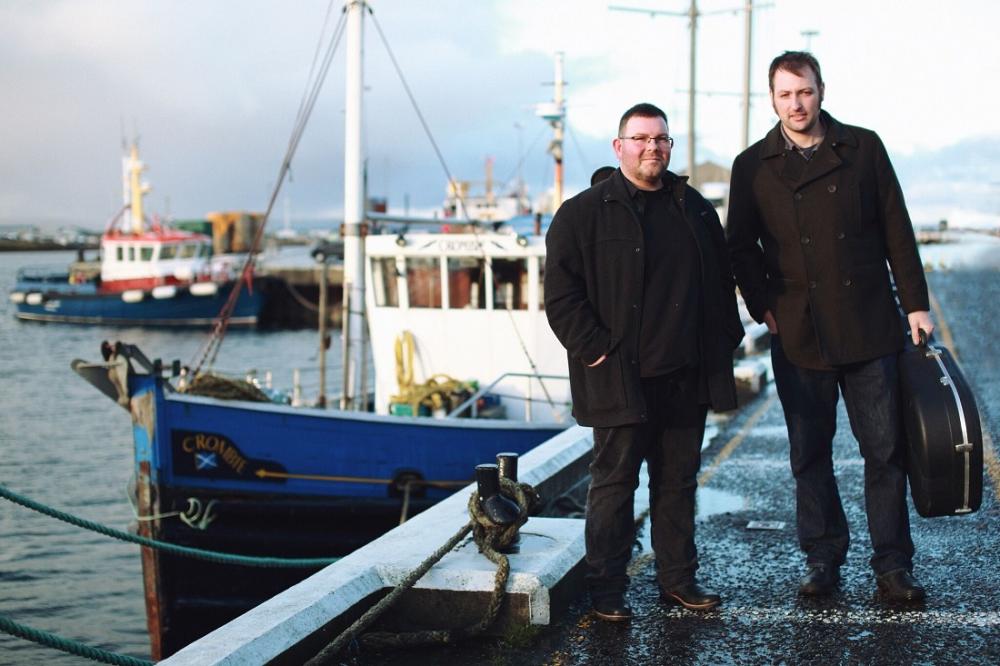 Orkney duo Saltfishforty will be performing at The Arc Sessions tomorrow, Saturday 30 March, at the Fochabers Institute.

Saltfishforty are a fresh and dynamic duo hailing from the Orkney Islands in the north of Scotland. Douglas Montgomery (fiddle / viola) and Brian Cromarty (songs / guitar / mandola) combine the rich traditional music of Orkney with original compositions. The duo have four previous albums to their name: LIVE (2013), Netherbow (2010), Orkney Twister (2005) and Goose Music (2003).

The powerhouse partnership have won a devoted following throughout the UK and beyond, brilliantly transcending the duo format’s conventional confines. Linchpin figures in the currently flourishing revival of Orkney’s traditional music, they unite these deep-rooted sources with an exhilarating breadth of influence and expertise, catalysed by a creative empathy born from decades of friendship.  The result is a sound of equally thrilling raw attack and multi-dimensional richness.

A partnership forged back in 2002 – more by accident than design – the two knew each other since primary school, and played together in sessions and various bands, until they were booked in a four-piece for a charity gig, and only the two turned up: “We decided to go on and just make as much noise as two people possibly could – which is kind of how it’s been ever since” they say.

Years later, Saltfishforty have delighted audiences at many of the world’s top folk festivals including Celtic Connections, Cambridge, HebCelt, Shetland, Lorient in Brittany and Canada’s Celtic Colours, as well as touring to the US and throughout Europe. Their focus on Orkney music takes in traditional, contemporary and original material, boldly cross-fertilised with influences from Americana to East European folk, plus a high-octane whiff of heavy metal.

Supporting Saltfishforty will be The Arc Fiddlers, a young group of local fiddle players from all over Moray aged between 13-16 who are all taught by accomplished Fochaber fiddler Mhairi Marwick, who said: “We are so excited to welcome this power duo from Orkney to The Arc Sessions for the first time! And this is a great platform for young, local talent The Arc Fiddlers to play on the same stage as this incredible duo, Saltfishforty.”

Tickets are available from www.arcsessions.com or from Christie’s Chemist in Fochabers.