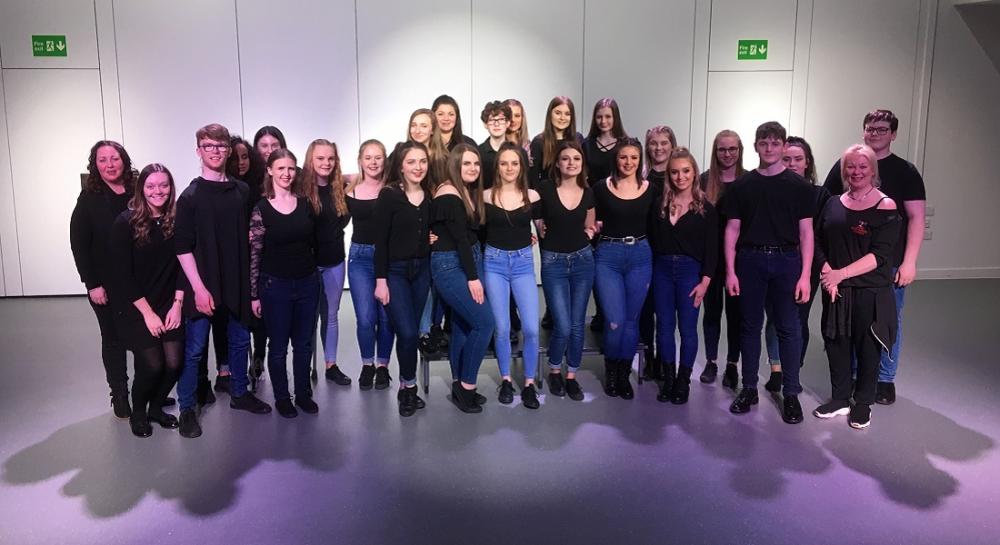 A new musical written and performed by a group of teenagers about the pressures they face has had its debut in a trilogy of shows.

Parallel Pressures: The Musical was the result of a collaboration between Developing the Young Workforce Moray (DYW Moray), Lossie Entertainment Academy and 16 S4 pupils from Buckie and Elgin High Schools.

DYW Moray is a government funded organisation which works with young people and employers throughout the region to help get them prepared for the world of work.

The youngsters worked with the performing arts school over the course of a few months and owner of the Academy Tish Tindall said she was thrilled with the result.

“The initial remit was about summing up what the role of DYW Moray is, but it has ended up being so much more than that. The youngsters grasped the concept, ran with it and have created a powerful piece of theatre.”

Tish added: “The young people got involved after we held auditions. Initially, once the cast was chosen, we had sessions to discuss what might be included in the musical and it was clear that at the age they are at they have all these different pressures they have to manage and that is why they decided to address these within the musical.”

“It has been a real journey,” added Tish, “the students have really developed as individuals. What was great is that they also worked closely with Lossie Entertainment Academy’s HND students so there was also some fabulous mentoring going on.

“The young people that came to us could barely even speak to me when we first met, but throughout the process where they have taken on roles such as directing, creating, singing and acting, they are now a completely different group of young adults. They have developed in confidence, their posture has changed, they now hold their heads up and they have developed real friendships with each other.”

Sarah Baxter, manager of DYW Moray said it is possibly one of the most poignant projects the organisation has been involved in: “What was great about this was how it all evolved. We wanted the young people to have the freedom to set the dialogue and they well and truly did that. However, they also kept in mind the original remit which was to get the DYW Moray message out there. Within the musical they refer to our ‘No Wrong Path’ campaign and they sing about DYW Moray being able to provide support into the world of work. It was a powerful piece of theatre.”

Anne Duncan, a board member with DYW Moray who has been involved in the project since it began last December said the young people stepped up to the mark: “From the outset this partnership was not about the finished product. It was about the opportunity for personal development given to all the participants through the rigours and demands of working with professionals in the creative industries.

“What is very poignant is that it is clear through the great performance that these young people have lived and breathed the pressures they act out, so they so ably portray and emerged triumphant. Many adults will find their message funny, stark, provocative and emotional at times but it is their message.”

Parallel Pressures was performed at Lossie Entertainment Academy and at Buckie and Elgin High Schools.