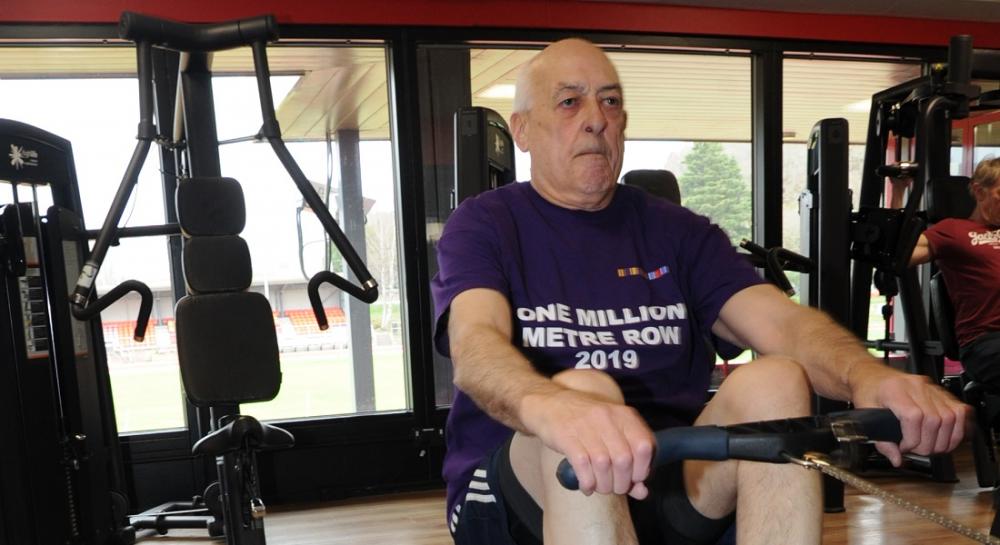 An Army Veteran from Inverness has set himself an extraordinary rowing challenge to support a charity close to his heart. He can be seen in action in Elgin today.

John Baillie, 76, former Staff Sergeant 2/51 Highlands Volunteer, served in the Adjutant General’s Corps, including three tours of Bosnia during the 1990’s.  This spring, John will row one million metres for Veterans’ charity Erskine but there’s no need for him to worry about the volatile Highland weather or turning tides, as he’ll be clocking up the miles on his trusty rowing machine!

After returning to Civvy Street, John worked in security and delivery for Tesco. Ingenious John has cleverly combined his vast experience as a Veteran, shop worker and fundraiser to raise money and awareness for Erskine.

Speaking about his challenge John said: “I’m doing a special tour of my own to help support my fellow Veterans. I’ll be rowing in local supermarkets around the Highlands and in my local gym in the next few months without moving an inch!  It’s an idea I’ve had for a while now.

“Having served in the Army, I’m well aware of the difficult experiences so many Service men and women go through.  Erskine do a wonderful job caring for Veterans and their families and so I felt taking on this challenge is the least I could do for them, whilst also keeping myself fit.

“I hope that locals and visitors to the area will see what I’m doing as unique and exciting.  The fact I’m rowing over 620 miles and am 77 on my next birthday will hopefully mean they’ll chuck a few quid into my collection bucket!”

John also plans to row in other places of interest around the Highlands including Fort George, where he volunteers at The Highlanders Museum, and the Victorian Market in Inverness.

Erskine’s Community Fundraiser for the North, Michael Parkes said: “It’s an honour that John is supporting Erskine with this incredible challenge.  John speaks very passionately about his time in the Army and his various charity work over the years.

“I’m sure his rowing challenge will be a great spectacle for people to come and watch, especially with the strong link to the Service community throughout the Highlands.  John’s phenomenal efforts will help us to continue to support almost 1,000 Veterans each year through our accommodation, activities and employment.”

John will be collecting funds at his first public rowing sessions at Elgin Tesco Extra today, Friday 19 April, and in his hometown at Inverness Eastfield Tesco on Sunday, 21 April from 10am. You can also support his efforts at https://www.justgiving.com/fundraising/john-baillie4.