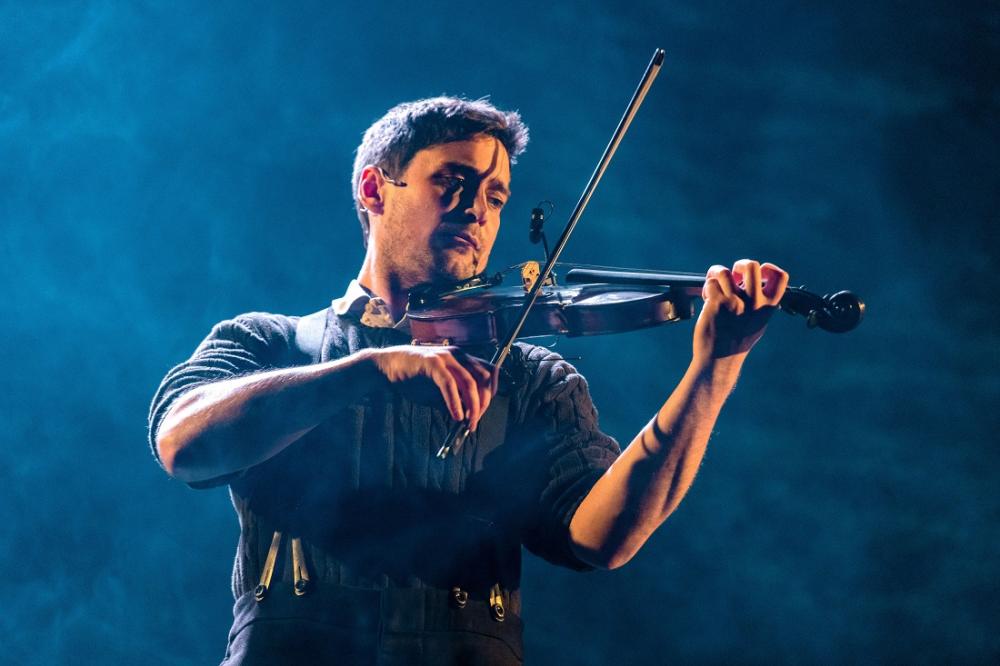 A driftwood violin created to be the “voice of the sea” is at the heart of a play about Scottish fishing folk and communities that is setting off on its world premiere tour across Scotland.

As reported by insideMORAY in April (http://www.insidemoray.com/lost-at-sea-is-homeward-bound/), the play is an epic family tale about fishing folk and communities that spans 40 years and was inspired by the loss of Morna’s fisherman father 30 years ago. It opened in Perth Theatre on 25 April and will tour across Scotland, including Aberdeen and Inverness, throughout May.

Thoren said: “This is the perfect instrument for the play. It is made from wood that was lost at sea for many years before being recovered and transformed into a work of art. It resonates very strongly with what Morna has done in writing a play that pays tribute to the fishermen and boats that have been lost at sea.”

The young musician, from Scottish band The Jacobites, is pleased to be reunited with the violin, which he first played when it was unveiled for World Oceans Day in 2018.

He will play it live on stage throughout the tour – performing original music composed by Pippa Murphy as well as songs by Ewan MacColl and Archie Fisher.

The instrument is known as ‘The Il Mare Driftwood Violin’. Its maker, Steve Burnett, is an artist and environmental campaigner as well as being a professional violinmaker, and is delighted that it is now taking centre stage in Lost at Sea.

Steve, who is based in Edinburgh, said: “I made the violin to be a voice for the sea – it was created from a piece of poplar that had been in the ocean for many years before it was finally washed ashore. So it’s very fitting that it should be played in a production about the fishermen and the dangers they face at sea.”

Steve’s own family were originally fishermen and boat builders in Aberdeen and Orkney.

The play is echoed in his own family history as his great great grandfather was killed in an accident on a trawler out of Aberdeen in the late 1800s.

His great grandmother, Helen Strachan, was born in Orkney in 1897 – a heritage that Steve has celebrated by adopting the Maeshowe Dragon as his maker’s mark and stamping it on the back of the violin.

Lost at Sea follows the story of a young woman who returns home to the small fishing village she came from to discover the truth behind the death of her father. As she begins to weave together the strands of her past, a mysterious force unravels family secrets.

Music and song are integral to the production, which features the hymn Will Your Anchor Hold.

Morna, who is a musician as well as a playwright, said: “There’s such a huge symbolism in ‘The Il Mare Driftwood Violin’ being played onstage in Lost at Sea. Its story and origins reflect so much that I have tried to explore in the play.

“It is a beautiful instrument and I think that audiences will absolutely love hearing it – especially when it’s being played by someone as talented as Thoren. I’m really honoured that Steve has allowed us to use this stunning, poignant instrument within the production.”

Lost at Sea marks a Scottish comeback for director Ian Brown. Lost at Sea is his first show in Scotland since his eight-year tenure as artistic director at Traverse Theatre, Edinburgh finished in 1999.

Further information and bookings for the Inverness and Aberdeen dates available on https://eden-court.co.uk and https://www.aberdeenperformingarts.com/