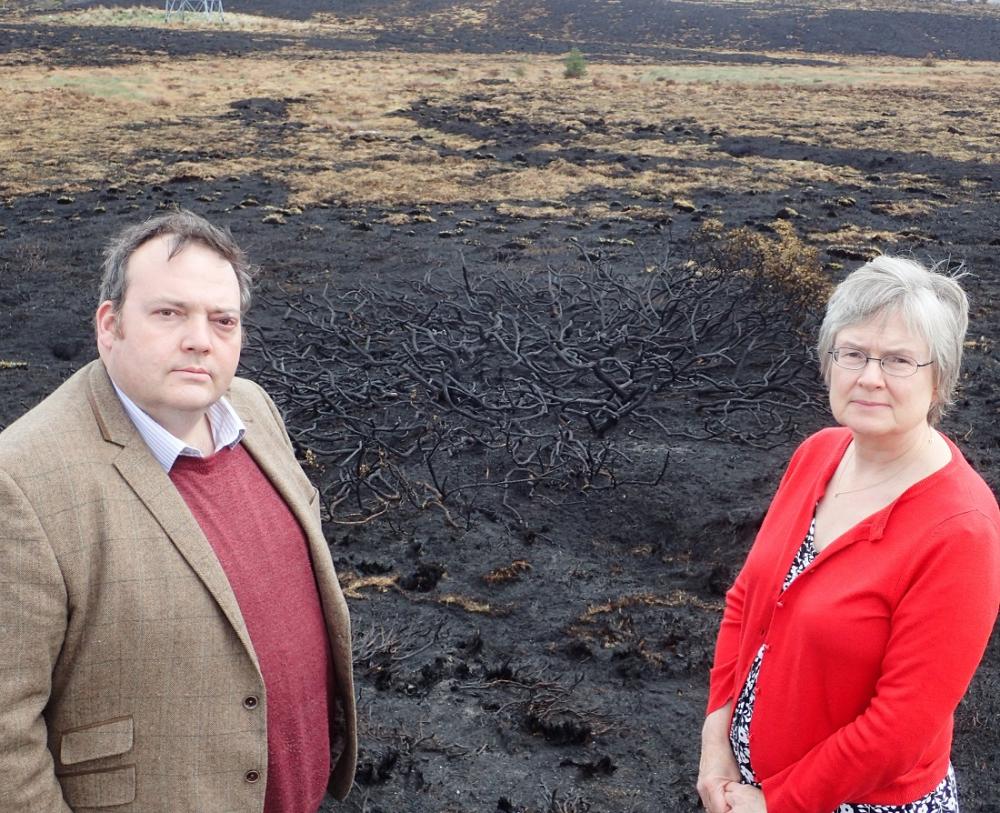 Moray is seeing a lot of activity and reflection after one of the biggest wildfires of recent years devastated large areas of Moray moorland.

As the risk of wildfire continues, despite the recent rain, the first of three multi-agency debrief meetings took place in Elgin Fire Station yesterday, Thursday 30 May.

Commenting after the meeting, Moray MP Douglas Ross said: “I welcome this multi-agency debrief meeting to look at the circumstances surrounding the wildfires, as there are still a number of questions that the community needs to have answered.

“We want to prevent these wildfires at all costs, but we also need to ensure that we have adequate resources in Moray to deal with these sorts of incidents should they arise again.

“It goes without saying that we all owe a great debt of gratitude to firefighters, volunteers, estate workers and all those who helped or supported everyone to deal with the recent fires.

“This meeting and the next two that have been scheduled will be crucial in terms of learning lessons and preparing for any future wildfires that could happen in Moray.”

Moray MSP Richard Lochhead is convening a public meeting in Dallas to discuss the recent wildfires.

He will be joined by representatives from the Scottish Fire and Rescue Service, as well as local police officers, who will outline the key issues and take questions from the public on recent events.

The meeting will be held on Monday, 3 June, at the Houldsworth Institute in Dallas starting at 7pm.

“I know that the increasing frequency of these fires locally is causing real concern in our rural communities, given the impact wildfires have on local landscapes, wildlife and habitats, as well as the potential threat they pose to infrastructure and homes.

“These recent fires were brought under control thanks to a monumental effort from local fire fighters, who worked alongside the police, gamekeepers, estate workers and other community volunteers, who rallied around to extinguish the fires under challenging conditions.

“I’ve had good discussions with Police Scotland and the Fire and Rescue Service about the need to be better prepared for wildfires, given that we expect to have more long, dry spells of weather in the future.

“A number of constituents have been in touch with me about a range of issues connected to the recent wildfires and the meeting will be a good opportunity for those to be aired and discussed.”

Commenting earlier this month, Forres Councillor Claire Feaver, said: “The latest devastating fire has taken place at Dunphail in my ward. It is absolutely heartbreaking to see what has happened and the enormous damage it has done to the wildlife in the area. Plant and insect communities will have been completely wiped out, small animals fried to death, and the breeding habitat of many bird species lost for the season.

“We have to review how we are managing these precious areas. Years of intensive management for grouse shooting has led to an unnatural monoculture of dry heather moorland covering hundreds of square miles of northern Scotland. Many of the natural wetland features which should be present on peat-based moorland have been drained in order to produce what are considered the right conditions for grouse productivity.

“Meanwhile miles of hardcore access tracks have been built across the moors for windfarm developments and a vast tonnage of concrete dug into the ground to provide foundations for turbines and pylons. This has broken up the peat, led to it drying out, and released carbon. This change in the hydrology of the moors has made them more vulnerable  to wildfires which, ironically, are so fierce that they are even threatening the turbines themselves.

“We have to start acting as responsible custodians for these special places and stop regarding them as expendable assets to be used and abused by special interest groups. It’s long past time when the management of the moorlands was properly reviewed with a view to protecting them.”