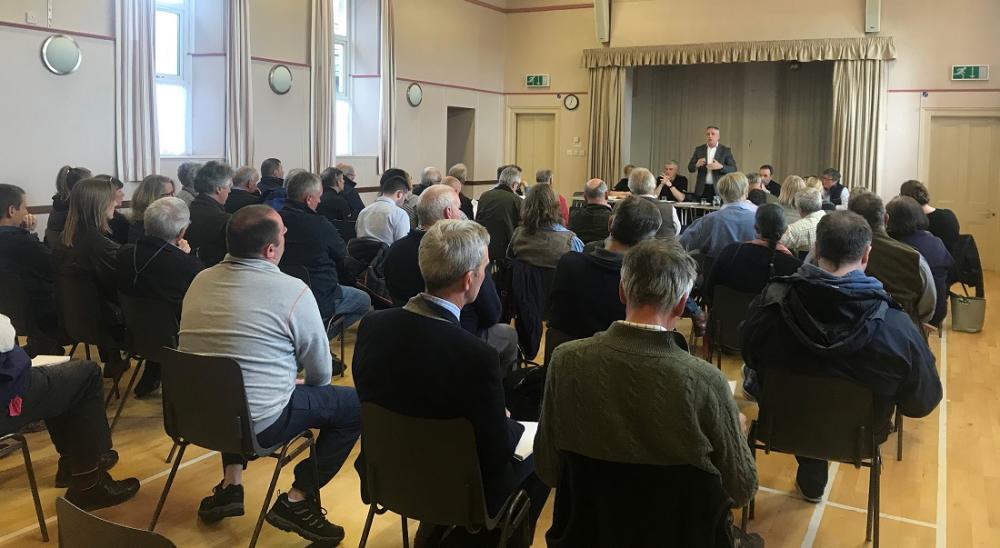 Mr Lochhead was joined by Bruce Farquharson from the Scottish Fire and Rescue Service, Moray police Area Commander Norman Stevenson and his colleague Inspector Kelly McPhail, as well as Denise Reid, Area Manager from SNH, who gave an outline of the key issues and took questions from the public on recent events.

Speaking after the meeting Mr Lochhead said: “This was a very well attended public meeting and the community were first and foremost keen to thank the emergency services, estate staff, gamekeepers, forestry staff and other volunteers for all their efforts in tackling the recent wildfires.  People were clearly taken aback by the scale of the wildfires.

“A big part of the discussion was the fact that we should expect more wildfires locally in the future because of the changing climate and the long dry summers that we’re set to have.

“Some of the key issues raised focused on how we can better prepare and what we can put in place now so that volunteers and resources are co-ordinated efficiently.  There’s clearly a need to look at how the use of helicopters are co-ordinated as they are a vital part of tackling wildfires, and we also need to ensure that the Scottish Fire and Rescue Service has the equipment they need to deal with these kind of incidents.

“The big picture is that the authorities were able to reassure the public that there is currently a major ‘lessons learned’ exercise underway, which will look at the response to the recent wildfires and how they can ensure they’re better prepared for wildfires in the future.

“It’s really important that the authorities were able to hear directly from the public and those who live in the areas affected.  There is still a lot of work to be done and issues to be look at however, in terms of engaging with the community I feel this was a good starting point.”

Moray Councillor and Chair of Police and Fire and Rescue Services Committee, Paula Coy added: “It was a well-attended meeting giving all an opportunity to voice their experiences and concerns going forward. With climate change a reality it is clear that these fires may well become more commonplace and it’s good to see communities work together with the emergency services and other agencies.

“For me, the most welcome aspect of this event, one of the largest wildfires in Scotland, has been the pretty much universal praise given to the Fire Service, estate workers, Scottish Forestry, windfarm employees and SNH for their efforts and collaboration.

“It was particularly good to hear our  MSP praise our retained fire-fighters who had to take considerable time away from their other jobs. It’s a real commitment for them and their employers and we are all so grateful.”

Councillor for Speyside Glenlivet, Louise Laing said: “The public meeting was very positive and it was good hear the views of the community and emergency services. Unfortunately it seems more fires like this are to be expected with climate change playing a part. As this was one of the biggest fires of this nature, usually seen in the Mediterranean, that we’ve seen in Scotland, we really need to take more precautions against fire risks and also climate change.”

Forres Councillor Aaron McLean added: “The public meeting was a great learning exercise for myself and was very informative on the role of not just the Fire Service but also that of estate workers and volunteers who assisted during the recent wildfires. There is plenty to work on going forward and I will be keeping a close eye on next steps and also how the council can assist other agencies.”

In a separate development, commenting after visiting the site of the recent wildfires near Dunphail on Friday, Moray MP Douglas Ross said: “Seeing the extent of the damage from the wildfire at first hand reinforced my understanding of the difficult job faced by firefighters, estate workers and volunteers who all came together to bring the wildfires under control.

“As a result, I am re-doubling my efforts to get answers to questions that constituents have raised with me following the wildfire.

“We also need reassurances that everything possible is being done to prevent a reoccurrence of these fires and to ensure that we have all the necessary resources available in Moray, should they be needed again in future.”