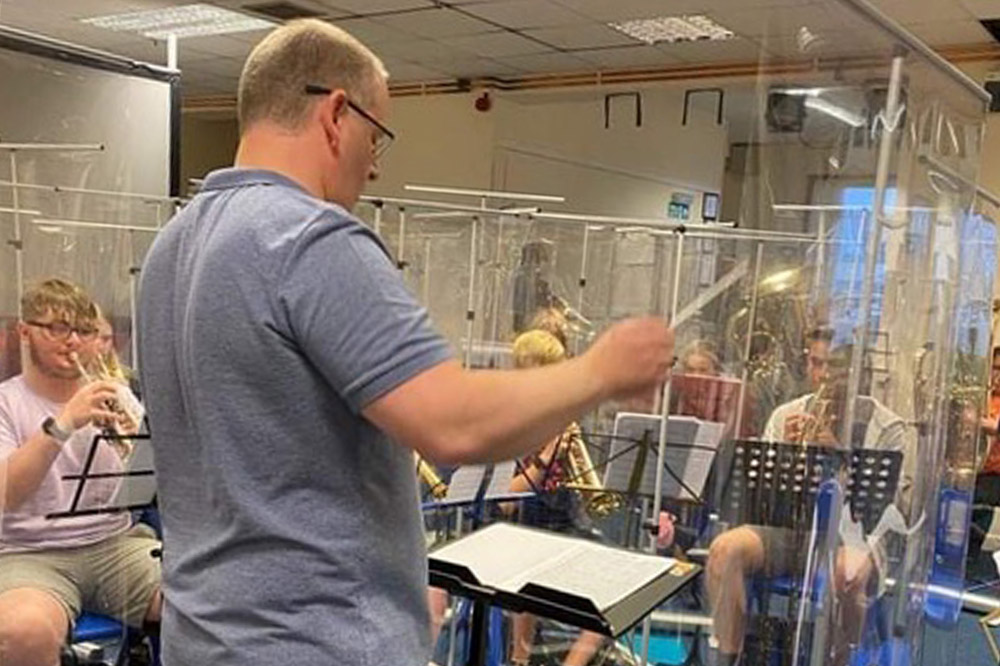 Local community band Moray Concert Brass finally got back to in-person rehearsals last week, and the players couldn’t hide their joy at being able to make music together again.

Due to the restrictions of the pandemic, the band has been meeting up through Zoom for the last 18 months.

They did manage a couple of outdoor rehearsals in the summer, but this was the first time they could come together and have an indoor rehearsal.

Despite the relaxation of restrictions, there was enhanced protections in place, with hand sanitiser, allocated seats, screens between the players and the members bringing their own music stands and music.

The clear screen used to help separate the players were bought with the help of a generous grant from The Adam Family Foundation and money raised by the band prior to the first lockdown in March 2020.

Musical director and founder of the band Glenn Munro said: “Although it is strange to look out and see all the players behind the clear screens, the safety of our players is our top priority.”

The extra precautions did not dampen the players’ enthusiasm and pleasure at being able to meet and play together after do long.

Trombone player Euan Adams said: “It’s good to be back and nice to be connecting through music again, while Joshua Toonen, who plays the euphonium said it “was like a breath of fresh air.”

Kate Mcluckie, who is part of the percussion section added: “It was very nice to hear everyone playing together in the same room and not over zoom.”

Trumpeter, Douglas Cowie, joked: “It was good to be back after what was nearly 18 months of no ‘in-person’ rehearsals, although Glenn’s jokes haven’t changed as much as the world over the past year and a bit. it was still great to be back properly playing again.”

Parents were also happy to see the return to the rehearsal room with cornet player Imogen Symon’s mother  saying,“ Imogen’s been practising hard at home during lockdown in readiness for tonight and is so happy to be back making music with her friends.”

It was double joy for Eilidh Boyd who said: “It was nice to see everyone in person and be able to feel and hear the music properly again.” Eilidh was also celebrating the delivery of a new top quality Eb Bass Tuba which she is being lent as part of the band’s project to buy and lend instruments to players. The tuba was bought with a generous  grant from the  Gordon and Ena Baxter Foundation.  Mr Munro said: “It is fantastic that we have been able to lend Eilidh the instrument she needs and it will really help her in her journey as a musician.

After the rehearsal Mr Munro added: “I am very proud of every player in Moray Concert Brass tonight. There was some fantastic playing, despite the strange set up.  We are hoping that things will hopefully return to normality in the not too distant future.”

The band is always on the lookout for new members both young and old, so why not get in touch with them and soon you could be playing along and enjoying the pleasure of community music making on a Thursday evening. Even if you have not played for a while or are a fairly new player there is a place for you. The band has a small number of instruments that it can lend to potential players. Contact Glenn Munro on 07897 205300 or email mcbinfo21@gmail.com for more details.

The band is also looking to expand its library of musical instruments so if you have any old brass or percussion instruments you no longer use that you would like to donate, or you are a local business that would like to sponsor a new instrument for the band please get in touch.